Thank you for bringing that to my attention. I was unaware of this package.

I'm sorry - apparently it has been my turn for days. I somehow missed that even though I was checking in. Before I declare action, I do have a few questions.

1) Is there anyone that is obviously attacking me?
2) Are there any pairs of combatants beside Giant Spider/Fighter?
3) Any chance we can build on prior skill actions?

At the moment, I'm not inclined to do anything. Maybe just scrutinize the guy I blamed for this whole mess.

No worries. There was a minor holiday that many people participated in. You're golden.

1) Obviously? No. Nofortunateone was disparaging your pedigree to me, but that was in private messaging.

2) The only active violence is centered on the spider. It is clear that there are simmering tensions throughout the hall. There was a fair amount of de-escalation from Able and Yuson.

3) The skill challenge was failed, and failed as poorly as it possibly could be. If the violence ends, there are definitely remedial steps available.

Feel free to do a lot or a little.

Decades of abuse have made Able cautious in these types of situations. The crowd can turn into a mob and tear down or destroy anything that they fixate on. Able wills himself to be a part of the forming mob - just another face in the mob - and certainly not their flash point. Let someone else say something to draw their ire. Unless things turn uglier (and he figures they will) he'll take no obvious action, simply preparing to defend himself if someone charges with a drawn weapon. There is a tension in the arm that he holds his spear like a staff - if someone charges he'll spit them like a game hen.

All other PCs can go ahead and declare their actions now.

It is in Drogak's nature to defend Elves, even what he considers ugly elves such as these. He's not sure what is happening in entirety. He recalls demon-boy yelling about his not knowing what he was doing.

He looks around and yells, "Are we doing nothing? Should I hit the thing again?"

In the interests of making all your lives easier, please allow me to suggest the following change to the HTML markup for your maps.

The latter version will size the image to fit within the width of a forum post, with an option to click on the image to see it full-size in a lightbox format, thus. 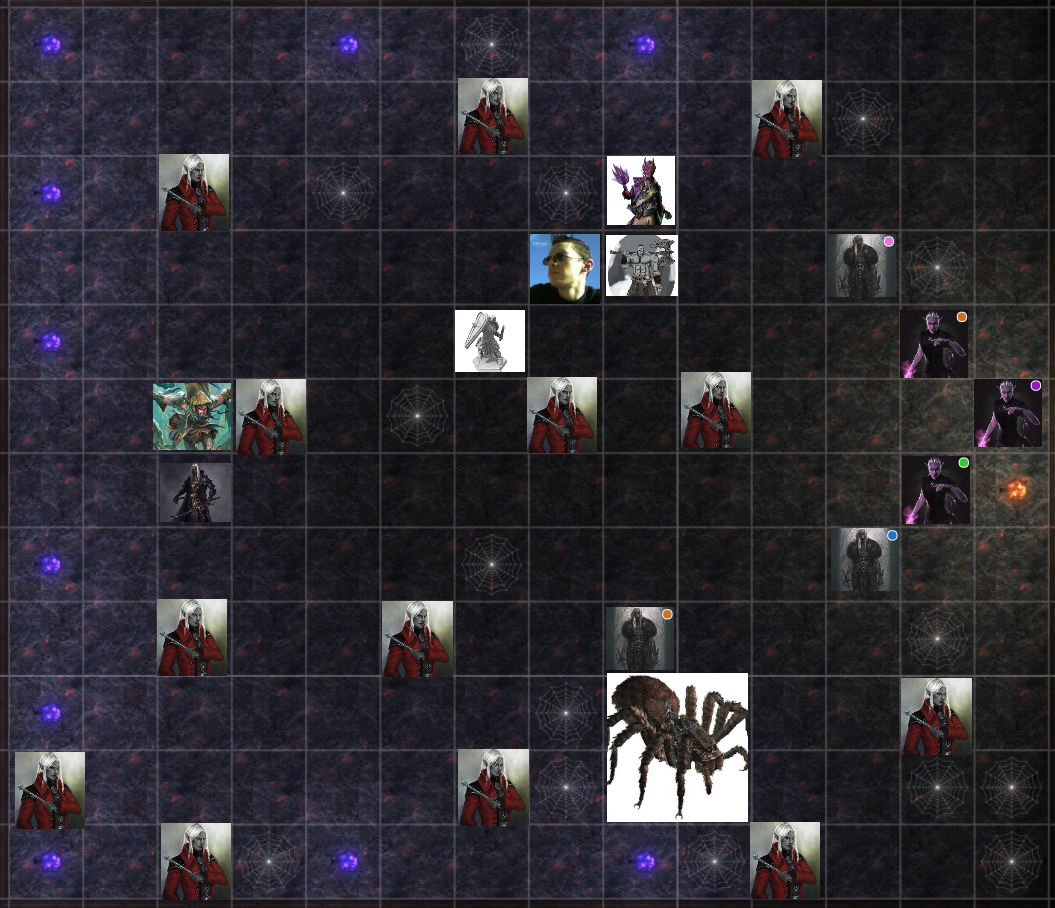 That is very helpful, thank you!

Sorry, I forgot all about this after receiving the notification. My understanding is that to be able to ready my action last round to cast [i]cure wounds[/i], I had to actually cast the spell but I was concentrating since then to maintain it before discharging it. If that is the case, Caleb will move down four squares to stand behind the orange Drow warrior to cast the spell on him. If he hasn't been injured yet (I know the spider attacked him but can't remember if you rolled for damage too), Caleb will stay where he is and use the spell on Drogak instead.

Clerics aren't considered proficient in their spells, are they? If so, the total should be 2 higher.

Caleb didn't cast the spell, so his action was wasted. Because he waited for Drogak to take another point of damage and Drogak did not, Caleb effectively hesitated. Caleb's potential heal target has not been injured.

Clerics ARE proficient in their spells, but that proficiency bonus applies to attack rolls only. Cure Wounds has no attack roll, so there is no +2. It should be noted that cure wounds always heals the target - there is no undead themed positive/negative energy interaction.

If nobody intends to escalate, we can drop out of rounds.

I don't want to escalate. Once everyone is calm and doesn't expect anything - that's when we start taking heads. ;)

Drogak reaches for anything alcoholic in the vicinity. He then sits in a chair nearby in frustration. Pacifistic it is.

Would you like me to roll initiative and jump in or wait until the encounter is over?

"You have the same twenty-four hours as me; don't be mad just because you don't use yours like I do." -Tupac Shakur

We are now out of initiative, as everyone has de-escalated out of the violence. Please feel free to hop into the thread.

We are now out of initiative, as everyone has de-escalated out of the violence. Please feel free to hop into the thread.

He's the leader of the Drow contingent that came through the portal to join the Forty.

Well, if he wants to sacrifice himself, I'm not going to pull a Rose and ruin it.

The PCs have a couple of options at this point. They came here to gather information, which has thus far been unsuccessful. They also have a couple of plot questions which arose during the prologue:

1) Who or what was Phaervorul? The deceased, Itar, was apparently instrumental in ensuring that the defense of Phaervorul was logistically possible. Evidently, there was a drow traitor who attacked Phaervorul and Itar interceded.

2) Why do Lili and Kalani hate each other so much? Is it simply because they're drow? That's entirely possible but unconfirmed.

3) What thievery was supposed to take place but which was accidentally thwarted by Caleb?

4) How much can Drogak drink in a single sitting? It should be noted that there is likely some sort of correlation between Drogak's drinking and additional violence.

5) Why was Yuson disappointed that only his hand was eaten, rather than being killed outright?

I want to encourage PC ownership of the campaign, so all of these are things that are very much so good ideas to pursue as they interest you. However, because I encourage PC ownership, I am also ready to say "The PCs look at the blood crazed dancing drow and nope right out of there." If we take that option, we'll get started with the campaign in earnest. Once we start the campaign, your character sheets will be locked. I will allow one respec at the end of level one.

I wanna change my spells (as previously discussed) so don't lock anything until I've fixed that. I'm happy to let others keep poking the drow and might choose to get involved depending on how that goes, but otherwise, I'm fine with 'noping right out'.

Drogak drunkenly reaches for another drink. A drink that is already nestled in the hand of a drow. He belts at the drow and perhaps the open air, "So, what's with the spider lady and what does she have against hands?"

Nothing to see here.

Constitution saving throw from the half orc, please.

I think Caleb is pretty much done here. He will try to get a moment alone with Simon Kendarr to tell him to check upstairs for sign of the ring of cutpurses but after that, he will take his leave of the party.

Drogak can immediately tell the beverage is poisoned. He is not mechanically affected, but he does feel a twinge in his gut.

Drogak yells, "MAKE WAY!!!" as he blasts to the nearest exit. He is taking his leave of the party also but not before having to release some gastrointestinal stress directly in the entrance way of the nearest exit.

We should probably take some time, since we are in the prologue, to discuss the themes and moods of the game. I envision that there will definitely be opportunities for comedy, but I also imagine there will be a fair amount of intrigue, dramatic tension, and mystery.

Fundamentally, I want my players to have fun, so I think setting expectations and meeting those expectations will be a big part of keeping everyone engaged, regardless of the action in the plot.

What do you guys want to see from this game? Are folks looking for some darkness or some laughs? Do people want to see dungeon crawls and multilevel battles, do folks want to see skill challenges and politics? What brings you to a DnD game?

I lean towards a more serious campaign personally and my preference, especially on a PbP, is definitely towards more roleplay-based encounters than dice-rolled encounters.

"You have the same twenty-four hours as me; don't be mad just because you don't use yours like I do." -Tupac Shakur

I absolutely love dungeon crawlers and laughes. If this is more of a political game I didn't intend to steer it off course.

I like watching people have fun. I'm up for anything.

For play style, I'll think about what my character would do and that's what I'll do (even if it probably isn't smart). I decided Tiefling Warlock before anything else (even reading the book) and the mechanics section tended to reinforce the 'loner' thing. That might make it hard to do anything heroic [i]at first[/i], but once I know the other characters that'll be less of an issue. At least at the beginning, Able needs a big old 'WIIFM' (what's in it for me'). Don't expect 'it's the right thing to do' or 'not even to prevent the end of the world' to work for him for the moment.

Let's do this - Watchers of the Dawn will be a bit more serious and dramatic. It'll be story focused, along with combat encounters that are dangerous and push the plot along.

If folks can find me four players interested in an over-the-top and funny campaign, I'll run another campaign concurrently. It'll involve drinking, swearing, sexually objectified orcish barbarians (male and female), and explosions. Whereas Watchers of the Dawn will be Game of Thrones, that other game will be Mr. Torgue's Campaign of Carnage.

I have played the shit out of borderlands 2! Whooooo!!

Cool, I think we're all on the same page. Nofortunateone, do you want to change Drogak at all? Once I get the impression that everybody is good with their sheets, we'll transition to Chapter 1.

I don't believe I will have much fun with a serious campaign. For me anyway. Is it possible for my character to suffer a massive heart attack?

I think we can elegantly start Chapter One without Drogak's involvement. Sorry to hear you won't be joining us.

Alrighty, locking this Prologue. Please do send me updated sheets for Chapter One, if you have any updates to make.

Topic: THE FUTURE OF THIS SITE
Okay, folks.
by Talanall
Topic: Seems on-brand.
by Fixxxer
Topic: Pathfinder: Wrath of the Righteous
Generally speaking, I think
by Cronono
Topic: Variant Flanking Rule
My group has been tossing around ideas for a
by catalyst
Topic: Discord?
Do we have a Discord channel for this group?
by catalyst