Anyone else chiming in on fire/no fire?

Zathrus doesn't care if we have a fire through the night, but if the choice is between a hot meal or a cold, then he'll choose the hot meal, even if we put the fire out before turning in.

Okay, then. Below is a map of what I THINK your camp probably will look like, unless Zathrus actually plans to pitch his tent (he doesn't need it for shelter, but it does provide a modicum of privacy). I'm proceeding from the assumption that you're going to have a fire for long enough to enjoy a hot meal, and then put it out thoroughly once you're ready to turn in for the night, so I haven't bothered with locating it on the map or plotting its illumination pattern.

If something looks wrong or isn't clear, please chime in. 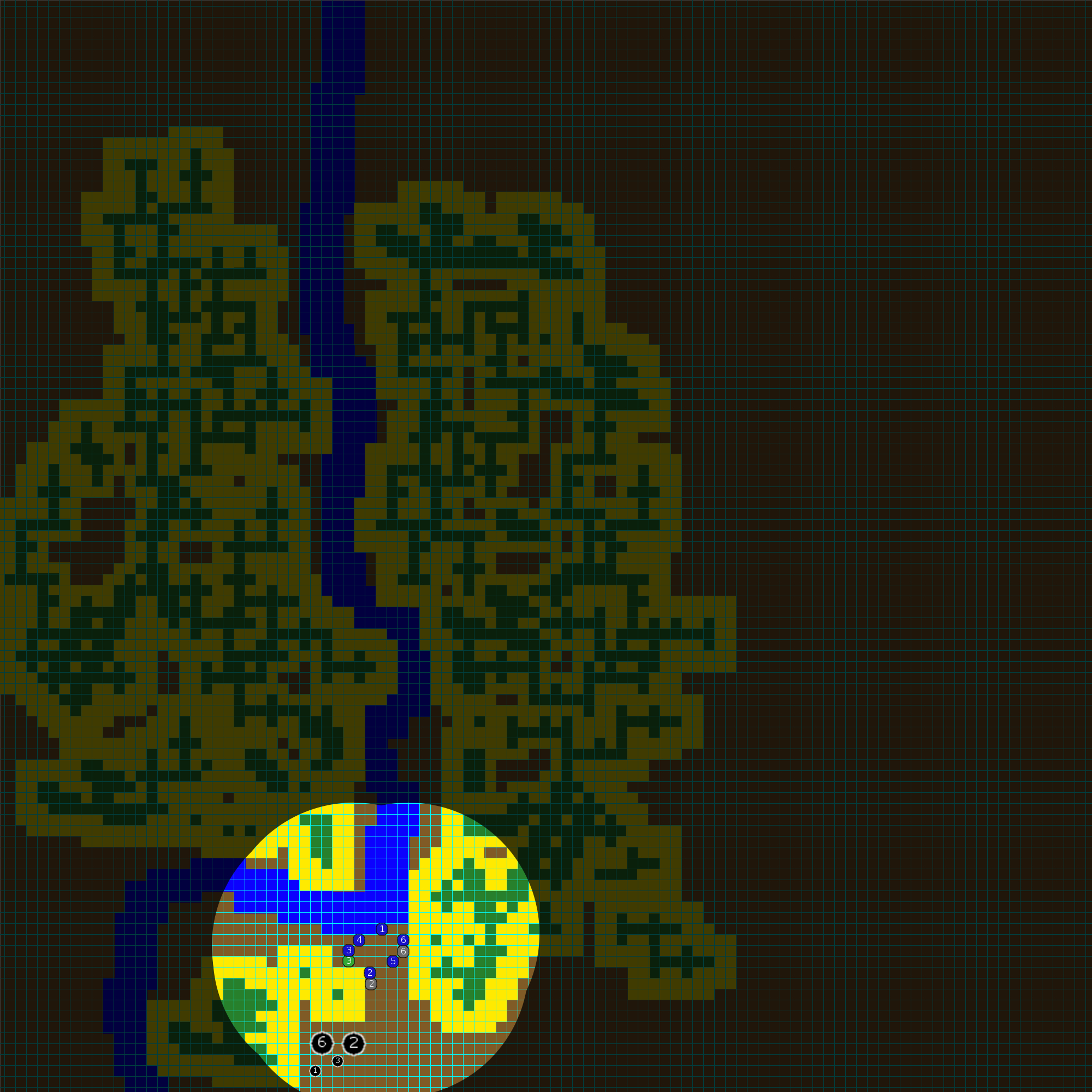 The cutout in shading reflects your party's joint field of vision when everyone is awake. The phase of the moon's not quite at waxing half, so your night vision is restricted to the span of your darkvision.

I'd like to know, in broad terms, how each PC is going to behave during his time on watch, in terms of whether and where he'll patrol, whether he'll hide somewhere and keep watch from concealment, or whatever else he might plan to do with his time besides stare anxiously into the night.

Please go ahead and roll Listen and Spot.

Zathrus wants his tent pitched, but isn't willing to do it himself tonight. On his time on watch, he'll do his job diligently enough and try to stick somewhat near Yonah for the duration. While not on watch, he'll want to bunk down somewhere with a modicum of concealment, so long as it's not brambles or something. Tall grass or the like would be ideal.

Oni will spend his watch walking from the center of the circle where everyone is sleeping and where the animals are spending the night. A wider perimeter sweep would probably require picking out a path between sleeping bodies or splashing around in the water, either of which would likely wake people up before it's their turn to stay awake.

He isn't a trained soldier or anything so we're not looking at any elaborate attempts to break up his routine or foil would-be ambushers. He's just trying not to get ganked and doesn't want to wander too far from the group so he can call for help ASAP.

Fanax will primarily stick to the area between the sleeping party and the animals. However, he will occasionally walk around dependent upon what Grim does.

Grim will suggest that he and Fanax take turns patrolling the perimeter of the camp while the other watch goblin keeps an eye on the camp and their partner.

Gorx is going to summon some water and some air elementals to help him keep watch. He's generally going to stay still in a single place and let the elementals patrol around the camp.

Yonah will circle the perimeter of the camp on his watch, close enough that no matter where he is he can still see the center of the camp. When it's time to sleep, he'll bed down in the tallest grass he can find.

What's the mix of spirits Gorx wants to call on? The list at https://www.dndarchive.com/comment/30379#comment-30379 is accurate for elementals and celestial/fiendish animals and vermin. Dominated options linger for a duration of 1 hour/effective shaman level: 6 hours for an elemental, or 4 hours for animals/vermin. Non-dominated options linger for 10 minutes/effective level, meaning an hour or 40 minutes, respectively. If he mixes categories, the shortest duration applies to everything he calls. Incorporeal undead are also available, but he's not strong enough to dominate any of those that are likely to answer his call.

He can have up to 12 HD of spirits if he calls solely on elementals and animal/vermin. If he mixes in incorporeal undead, he'll be limited to 8 HD.

I don't think he is really strong enough to call incorporeal undead and have them stick around for long enough that he could use them to help with sentry duty, so it's probably not worth bothering unless he really just wants someone to talk to.

Does this look roughly appropriate to how you guys plan to set up your camp for the night? Gorx's elemental buddies are placed about like he would want them for sentry duty?

Also, is he putting them on a standard picket, or some kind of patrol pattern?

The cutout in shading reflects your party's joint field of vision when everyone is awake. The phase of the moon's not quite at waxing half, so your night vision is restricted to the span of your darkvision.

Is sleeping inside of the underbrush an option? I wouldn't consider it, but I'm wondering if a goblin would.

Zathrus and Yonah both have bedded down in the underbrush, per the map. I don't see an issue with it. Like you, I would prefer not to do such a thing, but I'm not a goblin, and I have a deep loathing of biting insects.

Grim prefers to do that as well then.

Standard picket for the elementals. Gorx will sleep wherever the ground is most comfortable.

Being raised in Florida, my first assumption is always that if there's water nearby, there will be biting insects, grass or no.

Standard picket for the elementals.

Alright. One of the consequences of his pact is that he knows, very generally, what these creatures are experiencing because they're dominated, and that's a property of the condition. If he spends a standard action to concentrate on one of them, he can step up his level of input so that he's getting something like a real-time summary of what it sees/hears. It's not a matter of looking through the subject's eyes or hearing through its ears; rather than access to the creature's sensorium, he's getting a sort of data dump on how its mind is interpreting sensory input. I think we've established that the nature of this interface is such that he can expect that if one of his elementals is killed, injured, or incapacitated, he'll notice.

Controlling one of them is a matter of a move action. Very basic commands—"go there," "fight," "stay still," "hide," etc. are possible through the mental link you have with these spirits, but anything more complicated depends on verbal commands. Gorx doesn't speak Aquan or Terran, so that's basically off the table. He probably will have an easier time ordering them to do useful stuff if he has them within visual range, just because he's significantly smarter, more perceptive, and more knowledgeable about the Material Plane. But they have plenty of autonomy. Their sensory capabilities include 60 ft. darkvision, after which they're as limited as he is.

With all that in mind, does he want them to be closer/farther from where our band of quarrelsome dragon slayers have camped, compared to where I've already placed them?