Matt (Fixxxer) mentioned making a thread detailing the enemies you will all be facing since most of you are new to the 40k Universe and might not know what to expect. I fully agree, and thus, a thread was born.

Now, you will be facing many various enemies. As members of the Deathatch - the militant arm of the Inquisition's Ordo Xenos - the main focus of your wrath will more often than not be the Xenos (aliens) themselves. However, you are Adeptus Astartes, and no enemy of the Imperium shall escape your vengeance. More often than not, you will face off against hordes of lesser enemies. These are referred to as enemy "troop" units. In small groups and by themselves, these enemies have about a snowballs chance in Hell to put a scratch on your ceramite and plasteel armor. However, in large hordes they can pose a threat.

The next enemy type you will come up against are the "Elites." These dudes are better, faster, stronger, tougher and all around scarier than their "troop" counterparts. By themselves, the group should prevail without too much of a problem, but in equal numbers you guys will have your hands full. Chances are they will be spread out among hordes of lesser enemies.

Finally, the "Masters" come to play. When you see a Master you will know it. Bring a lunch, because you will be in for a fight and it might take some time. From a brief glance at their character stats, these enemies will take a combination of cunning, strategy, team work, and a glorious amount of fire power to take down. Basically, they are me if you cook my Ribeye well-done. 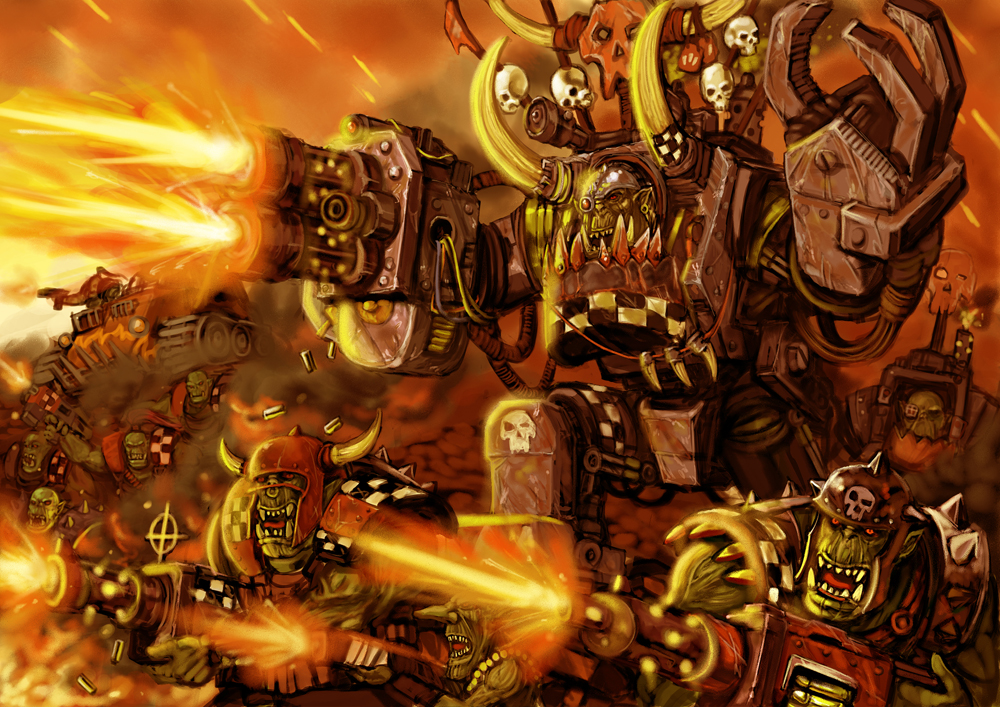 Orks are the genetic creation of an ancient race 60 million years extinct. They are large, green-skinned and ultra-violent. They are tough and can often take as much punishment as they dish out. In fact, it is said that an Ork can survive decaptation long enough for its head to be placed on another body; how close to fact this is is unkown. Collectively, they issue subtle psychic manifestations that allow their crudely crafted weapons and vehicles to actually work. For example, an Ork Starship will often function simply because of the will of the Orks piloting it, when in the hands of other beings, it would never get off the ground. Of course, this ability is completely un realized by the Orks themselves. Certain Ork shamans have better luck channeling this psychic potential, but even they do not realize their full potential or power.

Orks would have long ago taken over the galaxy if they could simply unite under one banner, but their propensity for violence and war often leads to vast in-fighting. And Ork conquests often fall apart with the death of a particular warlord or civil conflict within war bands.

Located on the far Eastern fringe of the Galaxy, the Tau are a young and hyper technologically advanced up and coming race. Composed of four "castes" (fire, earth, air and water), the Tau are eager in their expansion, offering the sentient races they encounter the chance to join their ever growing Empire. They operate under a philosophical belief in bringing the "Greater Good" to the larger Universe, often making small sacrifices to preserve the bigger whole. They are unique among the other races in the fact that they do not possess any latent psychic manifestations. This has two effects: for one, the Tau cannot access the Warp and thus do not suffer any chaotic invasions or daemonic incursions of their own doing. Their only experiences with Chaos have been random or while entering Imperial space. However, they also cannot access the Warp for interstellar travel which severely limits their abilities to travel the vast distances necessary to expand as they would like. At this point, they are the most technologically advanced race in the game, and yet the smallest empire.

Tau are smaller and often less stocky than the average human, with blue skin and hooved feet. They rely on their technological prowess and their myriad of allied auxillaries to do the heavy hitting during battles. This often takes the form of advanced battlesuits and vicious carniverous allies such as the Kroot and Vespid. 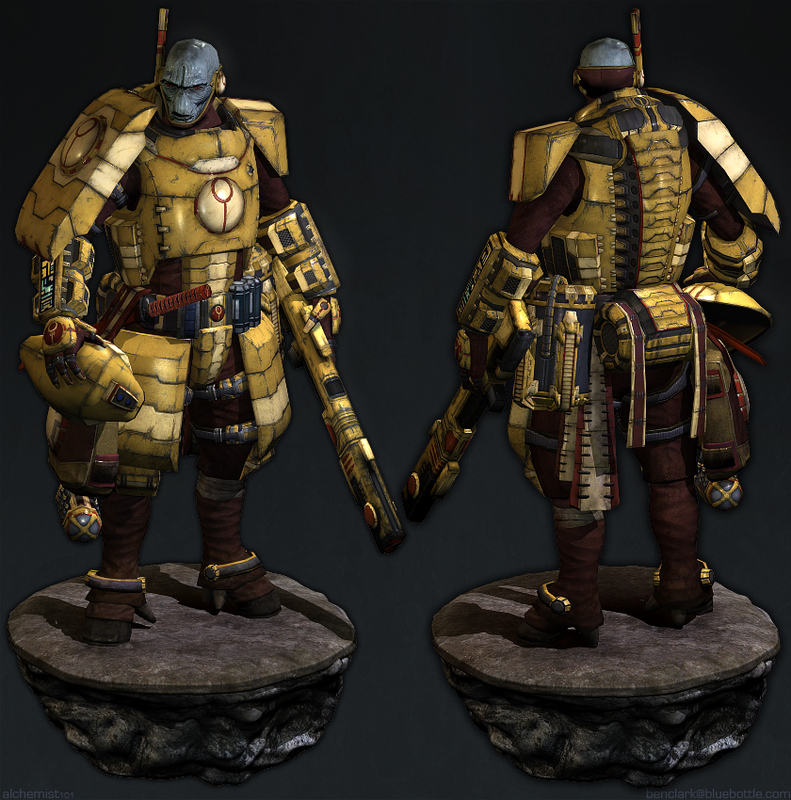 One of the most ancient still-living races in the game, the Eldar are a dying race of ancient beings. They are incredibly knowledgeable of the Warp, Warp Travel and psychic powers and their technologies surpass that of the imperium of man and are on par with that of the Tau. They are agile, tall, beautiful and tragic characters.

At the peak of their glory days, the Eldar had mastered warp travel and were the most advanced race in the Galaxy. They then turned to a life of hedonism (due to boredome) and as a result, their psychic energies and signatures within the Warp inadvertantly lead to the birth of the fourth chaos god Slaanesh. Slaanesh's birth created the terrible portion of the galaxy known as the Eye of Terror and destroyed the Eldar's homeworlds. They know exist on craftworlds (enormous city-sized space craft) and are slowly going extinct. 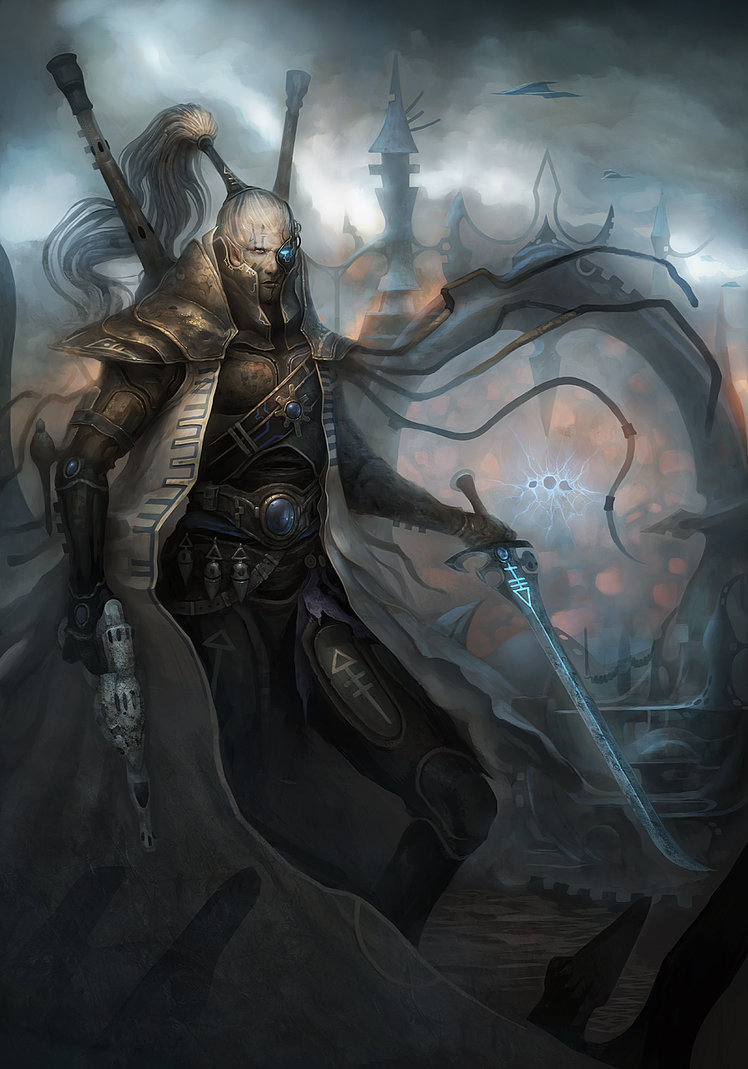 Think of regular Eldar only... Darker. These Space Elves are serious assholes. They live in small numbers like their Eldar counterparts, but they only exist to physically and mentally torture their victims. They are what nightmares are made of.

The Great Devourer. The Tyranids came from outside of the galaxy and it is theorized that they travel from galaxy to galaxy, stripping it of all life, and then moving on to the next. They are billions upon billions of living organisms, controlled psychically through a communal hive mind. Their "star ships" are actually mind numbingly massive living beings that send multitiudes of smaller creatures on worlds and consume and incorporate all organic material into the fleet. They are the single greatest threat facing the Galaxy and only through immense combined efforts can their "Hive Fleets" be destroyed. Destroying the larger, tougher Tyranids often severs the battlefield psychic link, leaving the rest of the 'Nids connected to it confused and unorganized.

Reference - Xenomorphs from Aliens but much more diverse. 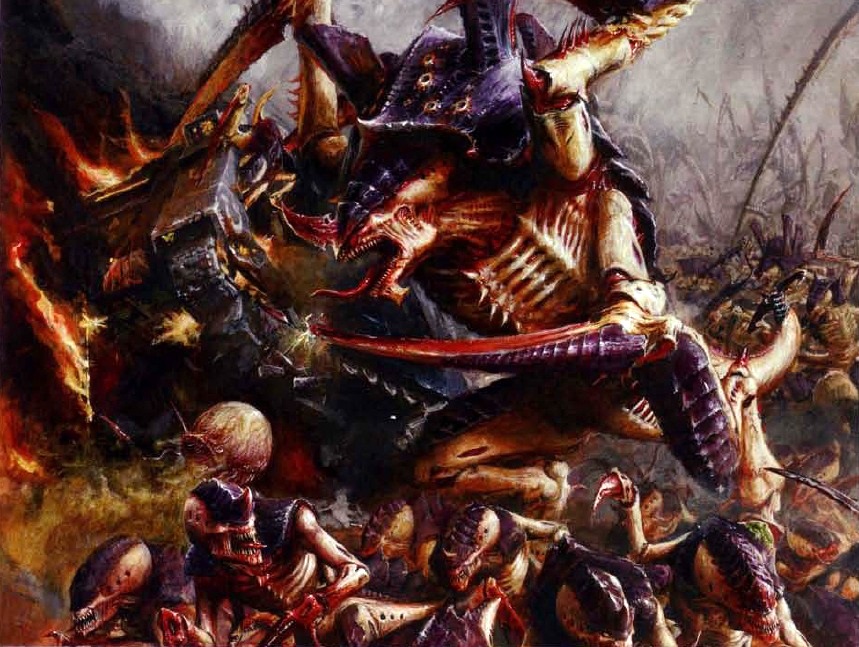 As a result of direct influence from the Hellish entities that exist in Warp Space, Chaos comes in a myriad of diverse forms and creations. Most iconic among them are the original traitor legions of the Adeptus Astartes - the Chaos Space Marines.

After their defeat at the hands of the Loyalist Astartes legions ten thousand years ago, the traitor legions took refuge within the Eye of Terror - a conduit between Warp Space and Real Space. As a result of time dialation in the Chaotic Eye, the Chaos Space Marines that exist today are more often than not the same traitors that turned on the Emperor ten thousand years prior. Twisted and mutated by the Warp, they exist in a constant state of hate, rage, and battle with the Imperium - the Horus Heresy never having ended for them. The best (worst) among them are often elevated to the level of Daemon Prince by their chosen Chaos God and rule over their own Nightmare worlds within the Eye of Terror.

Through manipulation of the Warp, Chaos Marines can show up in any system at any time and only through immense force by Imperial Guard, or the intervention of Loyalist Adeptus Astartes can they be stopped. Luckily, they suffer from the same problems of the Orks and wage war against one another within the Eye of Terror. However, sometime they will unite under a particularly powerful Dark Leader and wage a Black Crusade against the Imperium of man in an effort to conquer Holy Terra. 13 Black Crusades have been waged, and as of yet none have been successful. 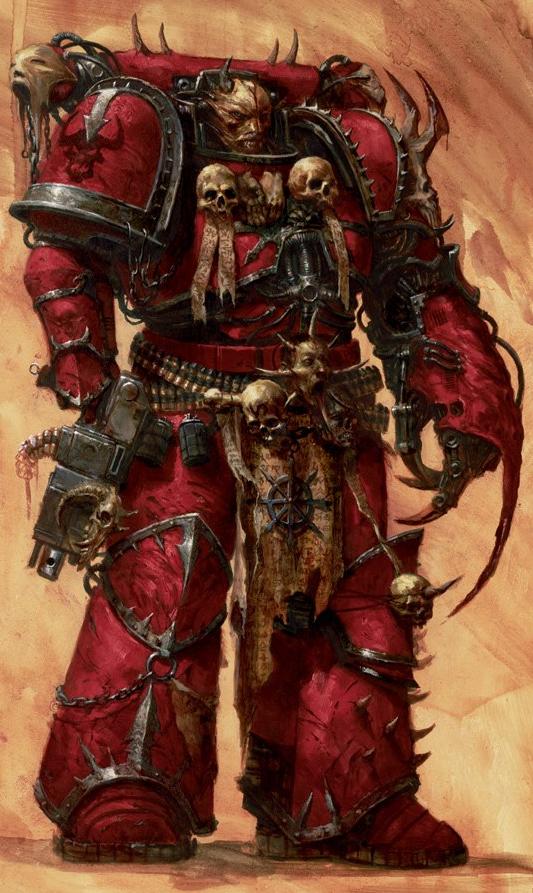 Average humans can and often are influenced by the Warp as well. Psykers, when unregulated and free, naturally channel the Warp to utilize their gifts. As a result, they are often conduits of Chaotic incursion from Warp space into Real Space. Rogue psykers are huge threats to the fabric of the Imperium. Daemonic incursion and prevention is the primary focus of the Inquisition's Ordo Malleus and their militant Astartes the Grey Knights.

Chaos taint can also cause genetic mutations in average humans and Space Marines alike, however, it is much more unlikely for a member of the Astartes to become chaotically tainted and mutate as a result. Mutants are considered unclean, extremely taboo, and are dealt with with extreme prejudice by the branches of the Imperium - specifically the Inquisition's Ordo Hereticus. However, some mutations are accepted as the occurence of time and various physical factors. Ratlings and Ogryn, for example, are mutations that occurred as a result of planetary influence during their long isolation from the Imperium of Man after the Age of Strife and are not considered Chaos influenced. These people may still be outcasts, but they are not killed outrightly.

Often, in dire circumstances or because they are being manipulated, ordinary humans will succumb to Chaos worship and stray from the path of the Emperor. They often form heretical cults and attempt to bring warp entities into real space. They must be destroyed at all costs. Burn the heretic and cleanse them of their blasphemous rituals and practices.

Need a new pic for the Tyranids, unless I'm the only one who can't see it.

No, it has been messed up since the get go. I just have been too lazy to fix.