Sister Mary gains $1 for being the Deputy of Arkham. Wither, Foresee and Seven Cryptical Books of Hsan become available to Sister Mary again.

Michael McGlen moves his Fight slider up by 1.

Michael McGlen uses his Mi-go Brain Case to swap places with the Leng Spider, placing him in the Rivertown streets, and leaving him with a Fire Vampire to deal with. It looks like a man, so Michael's mind is in no danger. His instincts and training as a gangster serve him well, and he grabs the vampire's head and twists it completely around. He takes the Fire Vampire as a trophy.

Sister Mary is no longer delayed. 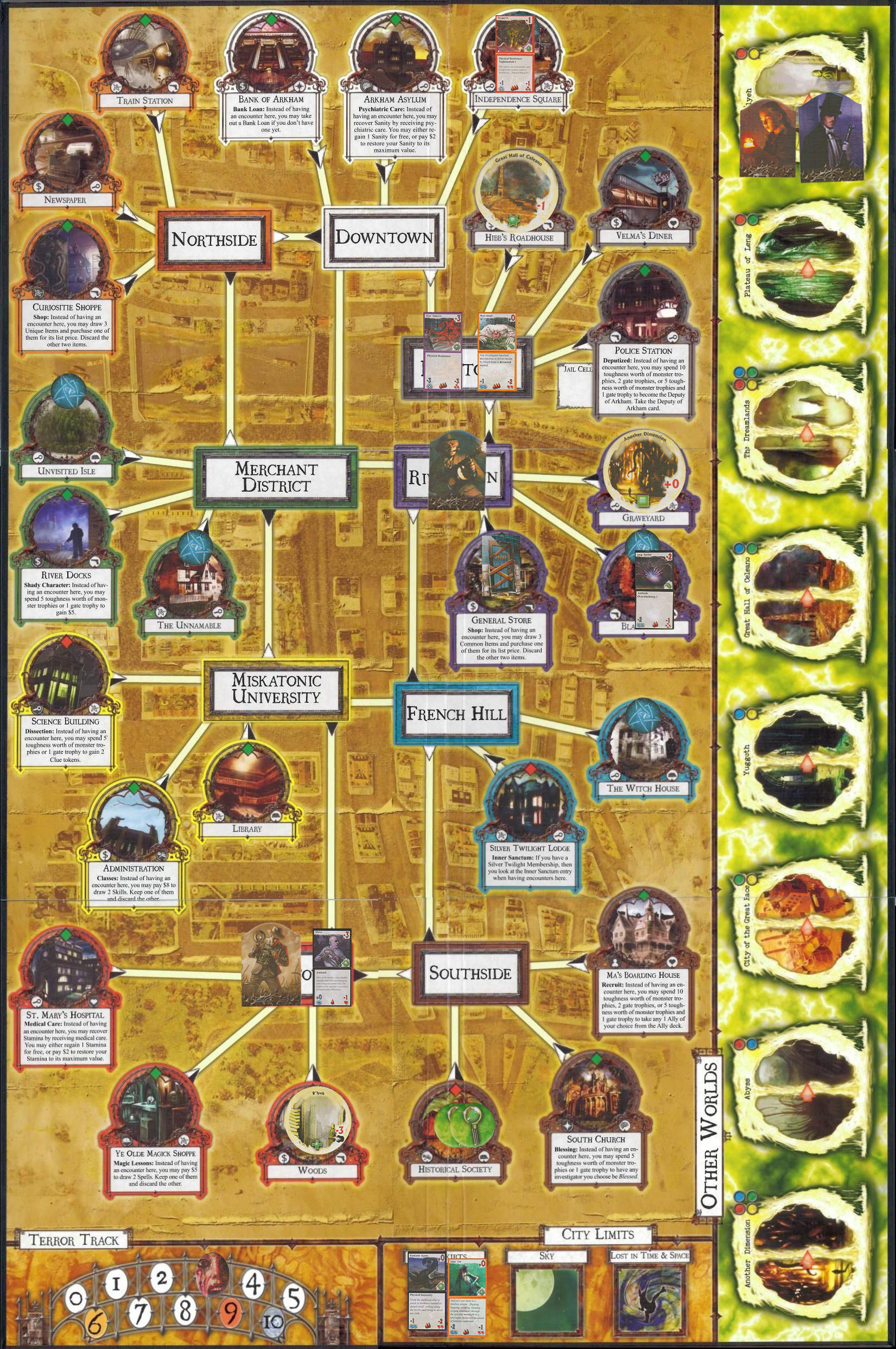 Movement:
Darrell Simmons turns to confront the wretched Ghoul in the streets with him. But he finds that his mind, so overtaxed with the entire situation at hand, can't cope with the horror of what he's seeing. He blacks out mentally and when he wakes up, he finds himself in Arkham Asylum. 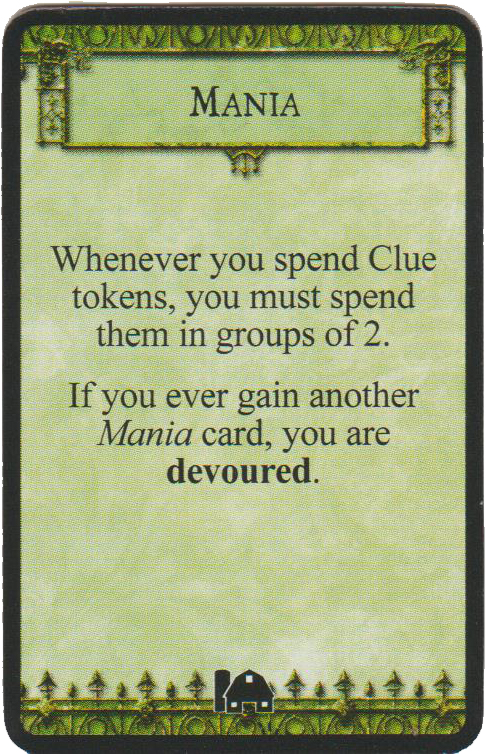 Other World Encounters:
Seeing an opportunity, Dexter Drake takes Sister Mary's copy of Seven Cryptical Books of Hsan, giving her his Athame to help keep her alive in his horrid world. Using a passage he finds in his newly-acquired books, he casts Find Gate without damaging his psyche. In a blink, he returns to Arkham.

Other - The unending blackness terrifies you. Pass a Will (-1) check or lose 1 sanity and 1 stamina from fear and exhaustion. 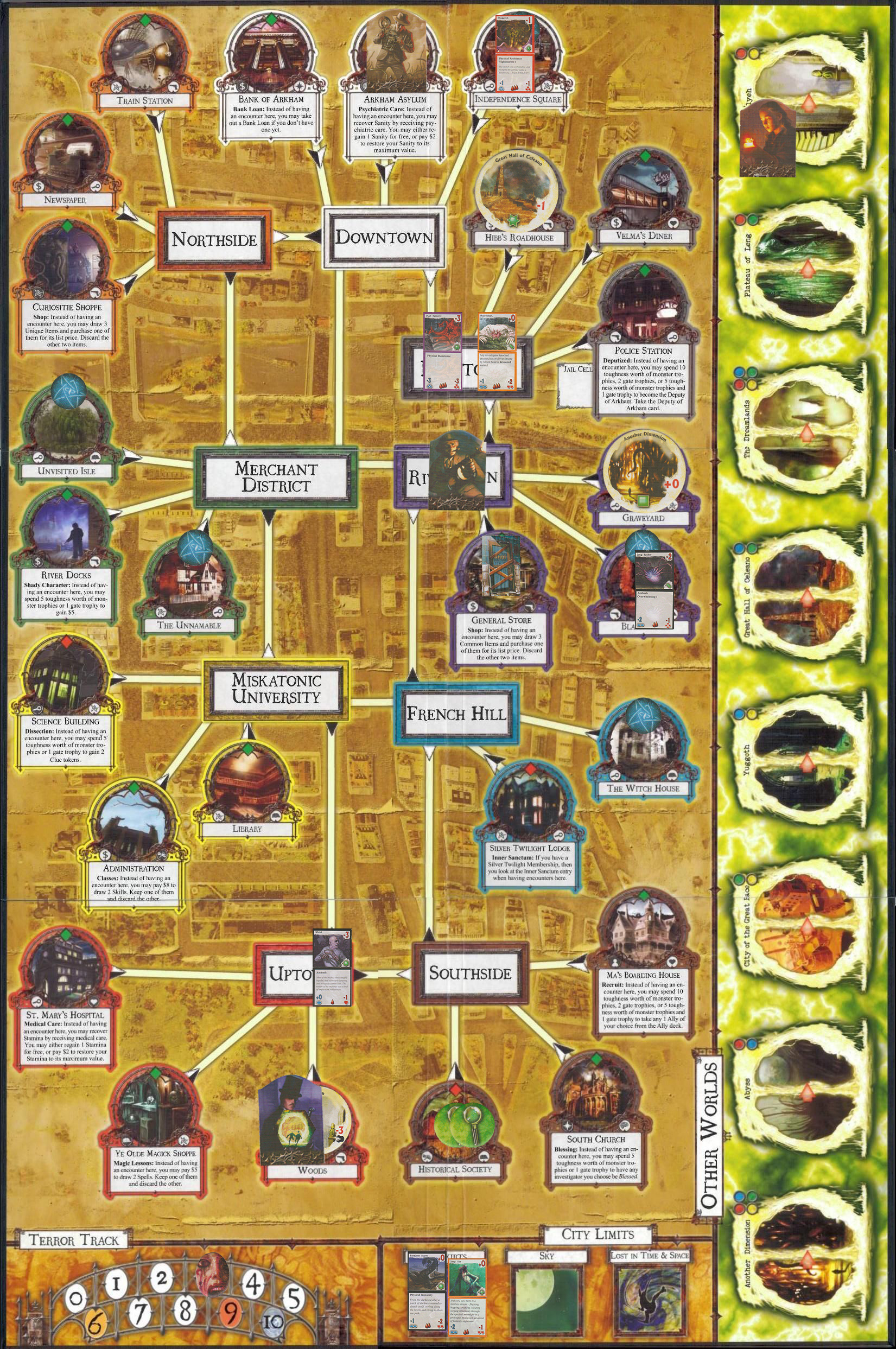 Other World Encounters:
Sister Mary cowboys up and powers through her fear without letting it ruin her.

Mythos:
A gate tries to appear at Woods, but can't because a gate is already present there. Instead, monsters pour from open gates. As the limit of monsters Arkham can hold approaches, other monsters begin making their way to the Outskirts of town.

A Clue appears at Historical Society.

Headline - Strange Lights on Campus!
The Library, Administration Building and Science Building are all closed until the end of next turn. 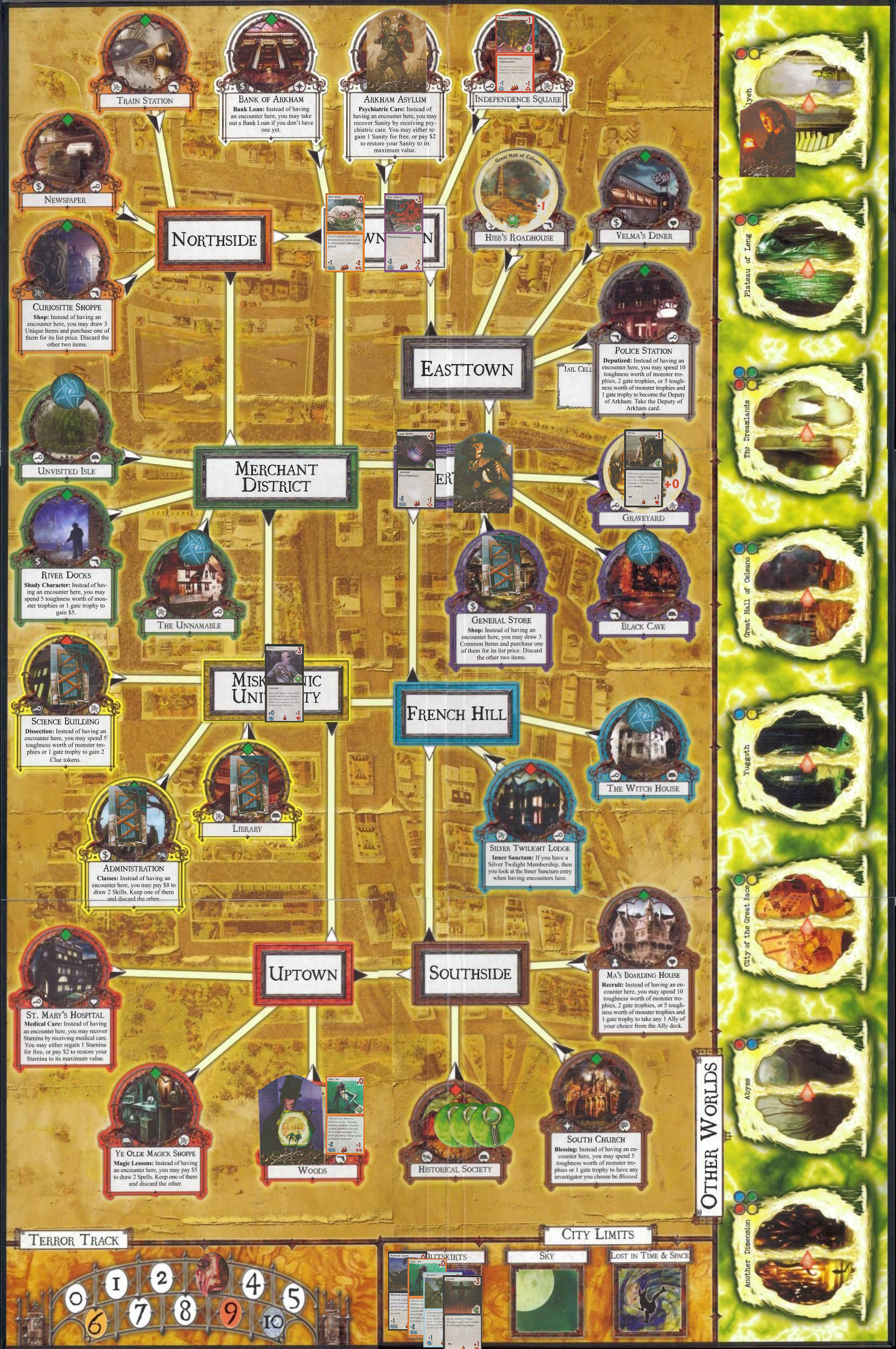 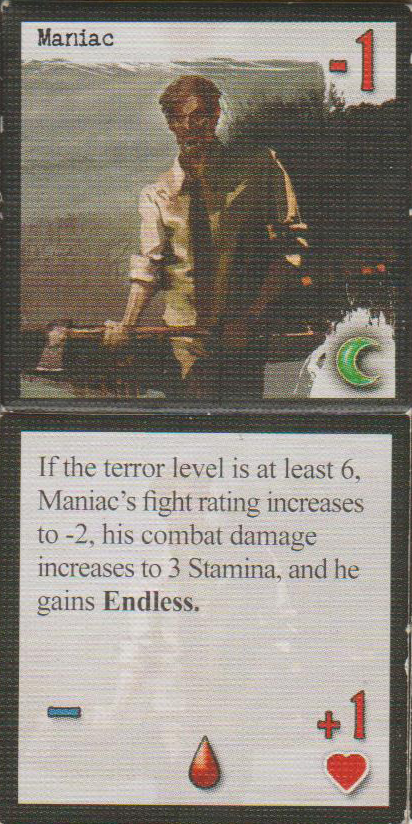 Darrell Simmons's Cryptozoology Collection becomes available again. He adjusts his Will and Luck sliders by 1.

Movement:
Michael McGlen doesn't even want to think about the Leng Spider. He uses his Mi-go Brain Case to swap places with the Maniac in Graveyard. 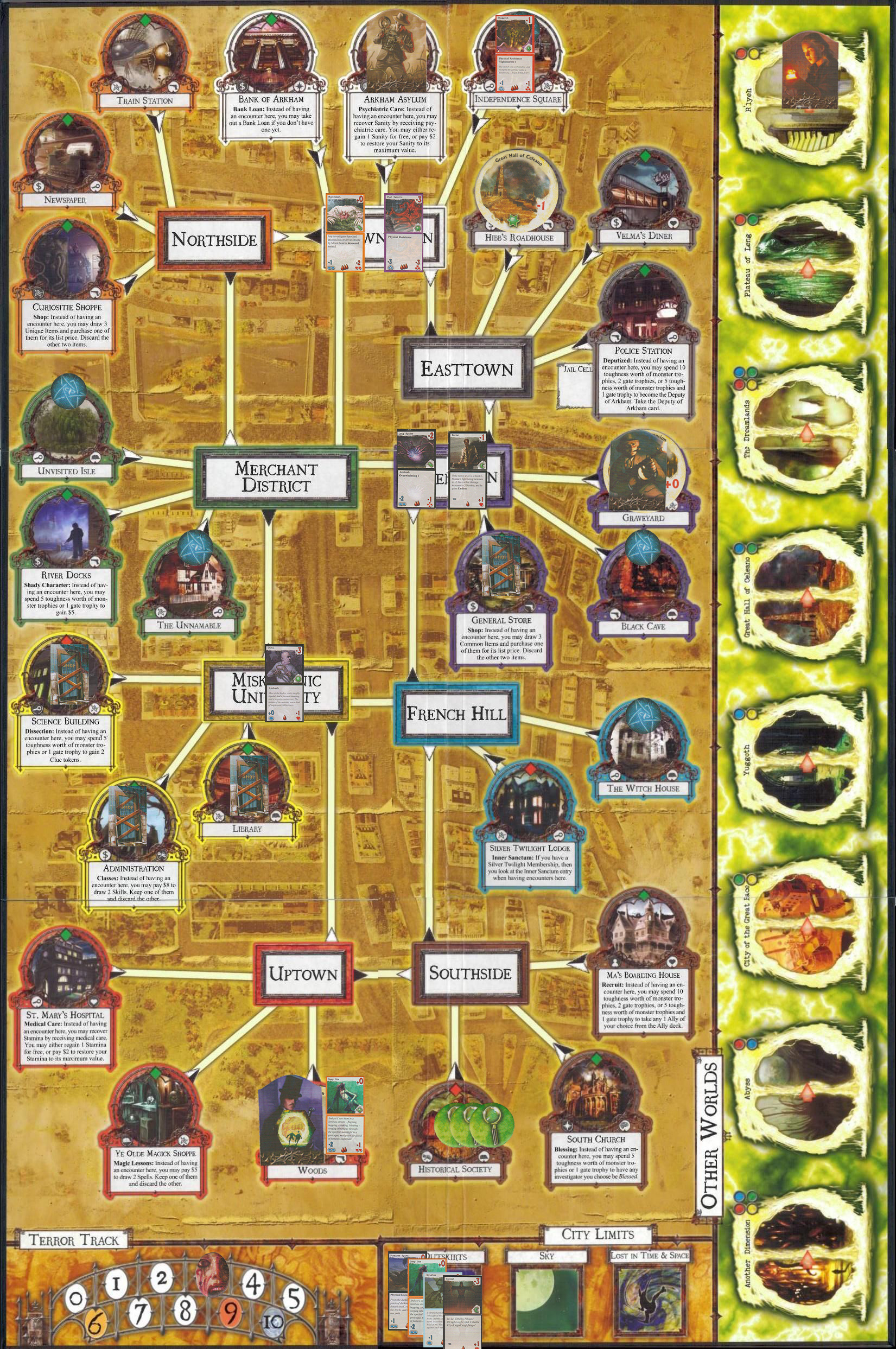 Movement:
Dexter Drake tries to sneak past the Deep One. He's almost discovered, but he utilizes some of the occult knowledge he's picked up to misdirect it and get away. He heads to Historical Society and retrieves the Clues he finds there.

Arkham Encounters:
Michael McGlen enters the gate to Another Dimension.

Darrell Simmons draws two cards and may choose one.

Arkham Asylum - "Everything's going to be fine," says a kindly patient in the lounge, seeming quite lucid. He pats your hand, gets up, and walks off. The strange thing is, you find yourself quite convinced. Gain 3 sanity.

Arkham Asylum - You find some strange medicine labeled "Dream Enhancers" in a dusty cabinet. If you choose to take it, make a Lore (-1) check. If you pass, your visions show you how to perform a ritual. Draw 1 spell. Otherwise, nothing happens.

Historical Society - A guest lecturer provides a lengthy but informative presentation about his explorations of ancient sites. You may make a Lore (-1)[2] check and stay here next turn. If you pass, gain 1 skill. 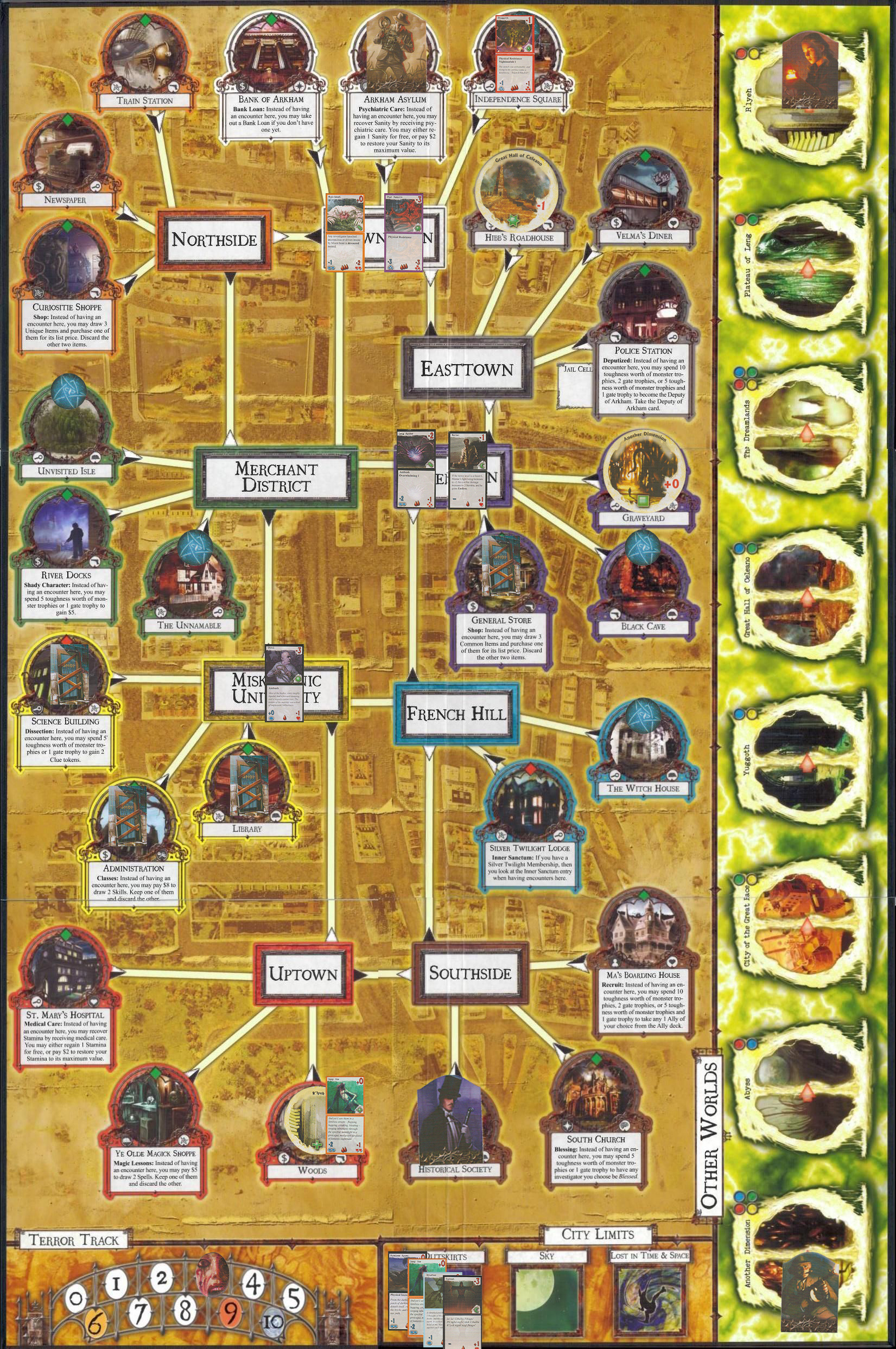 Arkham Encounters:
Darrell Simmons gets experimental and tries the "Dream Enhancers", but either they're old or just duds, because nothing happens.

Dexter Drake sits and listens to the lecturer, but doesn't understand much of what he hears.

Other - You sleep, fitfully, and awaken to the sound of your own voice, chanting something. Make a Luck (-2) check. If you pass, you are able to retain what you are saying. Draw 1 spell and gain 2 Clue tokens. If you fail, the chant attracts something unsavory. A monster appears! 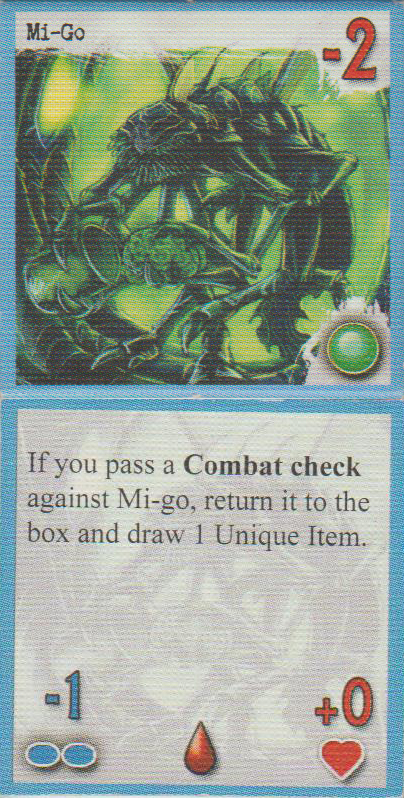 A Mi-go appears. Michael McGlen's mind begins to twist at the odd geometry of it, but as it has many times now, his Mental Fortitude saves him from insanity. He unlimbners his tommy gun and hoses the creature down in a hail of lead. In the Mi-go's remains, he finds an Enchanted Knife. 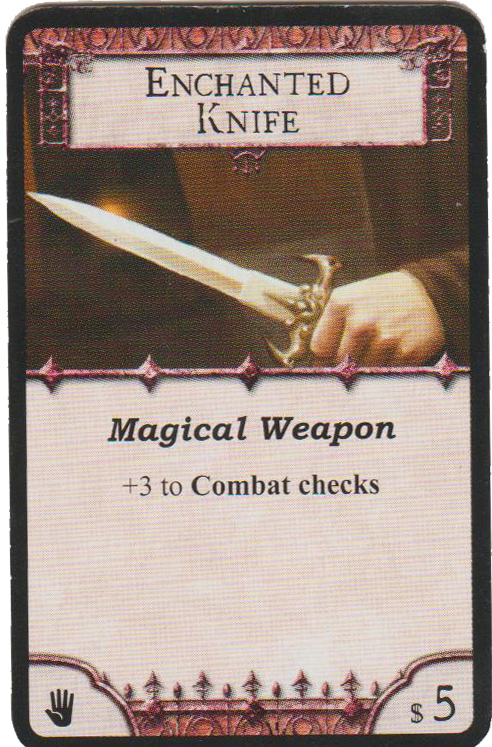 Other - The fumes overcome you at last, causing you to sink into a dreamless sleep. Stay here next turn.

Mythos:
A gate tries to appear at Graveyard, but can't because a gate is already present there. Instead, monsters pour from open gates. Arkham is overrun by monsters, which make their way to the Outskirts. The Terror Level increases. Sir William Brinton flees Arkham.

A Clue appears at Unvisited Isle.

Solar Eclipse - Environment (Mystic)
Due to the interference of the solar eclipse, no spells may be cast. 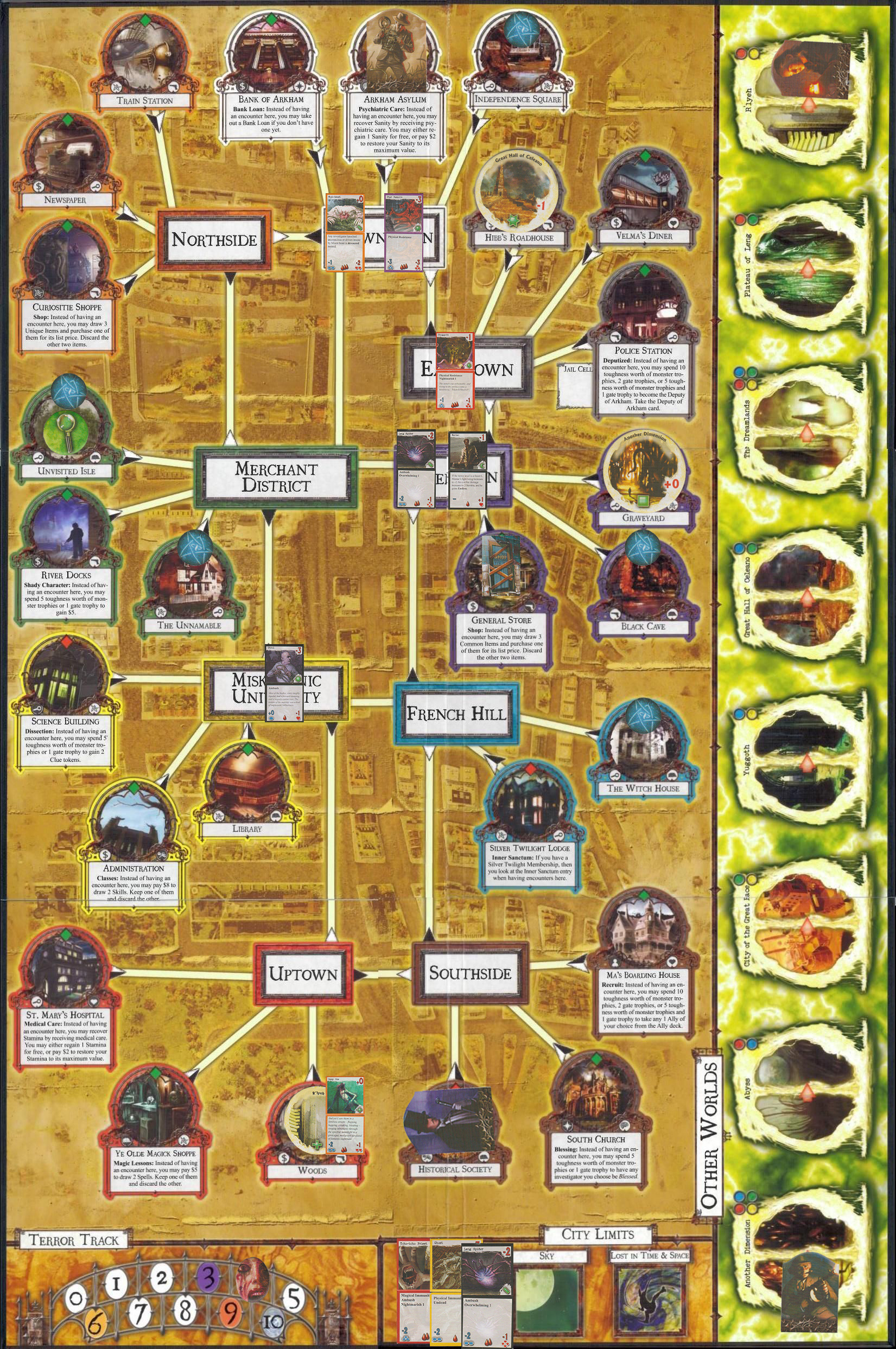 Sister Mary draws her paycheck. She retains her blessing.

Michael McGlen's Mi-go Brain Case becomes available again. He spends all his Focus to un-exhaust his Mental Fortitude skill. He retains his blessing.

Darrell Simmons moves his Fight slider to its highest position.

Darrel Simmons goes stir crazy and heads out into the streets. He barrels outside and straight into the Moon-beast, his newly-refreshed mind twisting violently at the sight of something that should not be. He hefts his axe above his head and screaming and slams it home on the Moon-beast's neck, its momentum ripping through the creature's sternum, opening its innards onto the pavement. Darrell takes the Moon-beast as a trophy.

He then turns his attention to the fearsome Star Vampire. Realizing he has no chance against it, he attempts to sneak by while it's distracted with the death of the Moon-beast. He consults his Cryptozoology Collection to see if there's any tips for doing so and tries to move past slowly. And he trips over his own two feet, landing directly beneath the jaws of the horror. "This is my last thought," he thinks just as the crooked teeth of the beast tear through his back.

He wakes up in St. Mary's Hospital some time later, surprised to be alive and suffering from acute hearing loss.

Dexter Drake finishes listening to the old windbag harp on about topics he doesn't understand.

Michael McGlen makes his way deeper into Another Dimension.

Historical Society - A white-haired professor offers to help you if you can prove the legitimacy of your mission. You may spend a gate trophy to take Professor Armitage's Ally card, or, if it's not available, draw 1 unique item.

Other - The sucking mouths drain enough of your blood to leave you dizzy. Lose 1 stamina.

Other - Carefully, you avoid the gaze of a gigantic eye watching an altar. You may try to pass a Sneak (-1) check to steal a scroll from the dais. Draw 1 spell. If you fail, you are wracked by pain and lose 3 sanity. 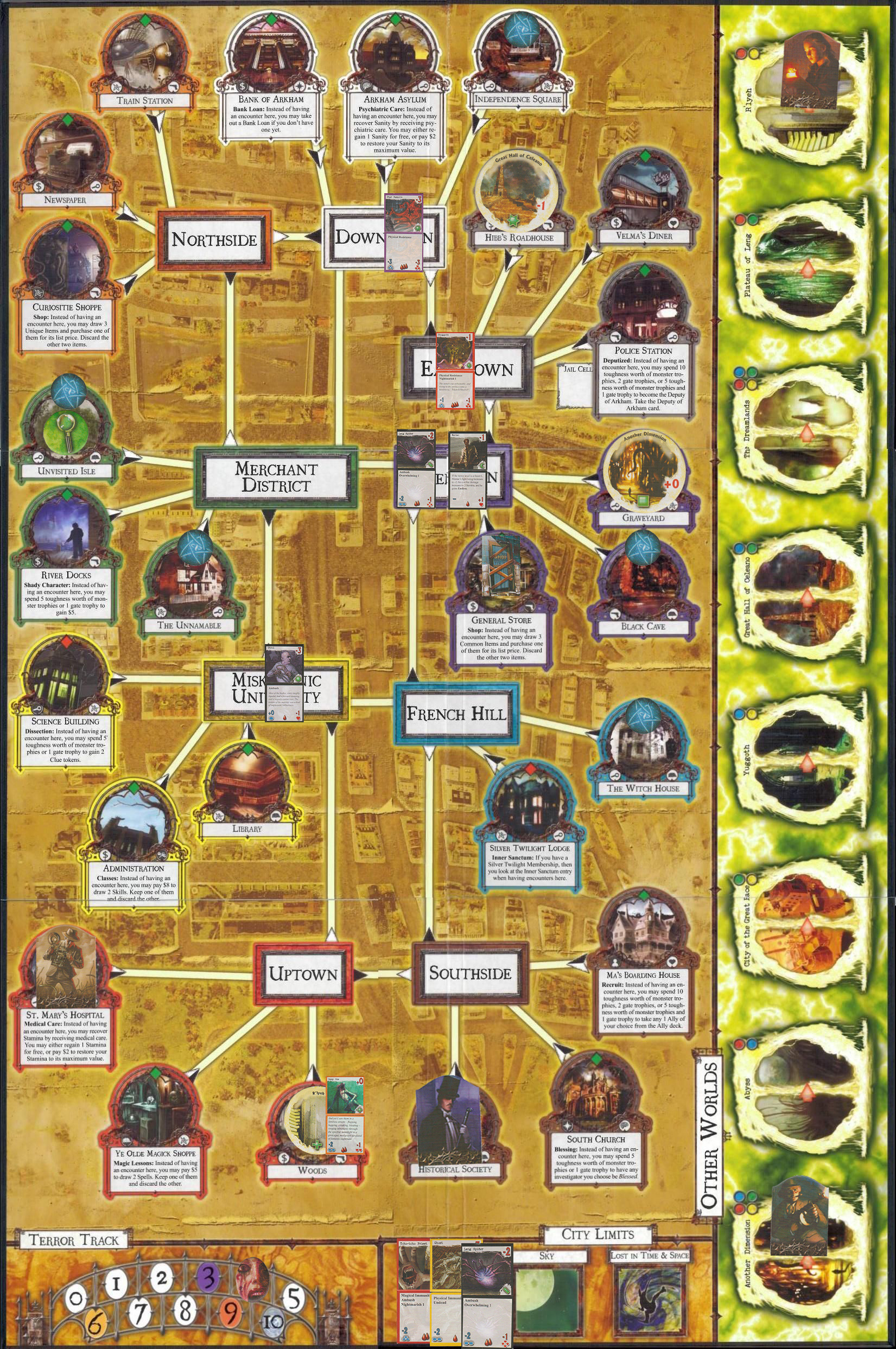 Mythos:
A gate appears at Silver Twilight Lodge. A ghost hovers through it. A Clue token is removed from the rumor.

A Clue appears at Graveyard, but is lost forever through the open gate.

The Solar Eclipse environment persists.
Due to the interference of the solar eclipse, no spells may be cast.

Headline - Police Step Up Patrols in Northside!
All monsters in the Northside streets or Locations are returned to the cup. 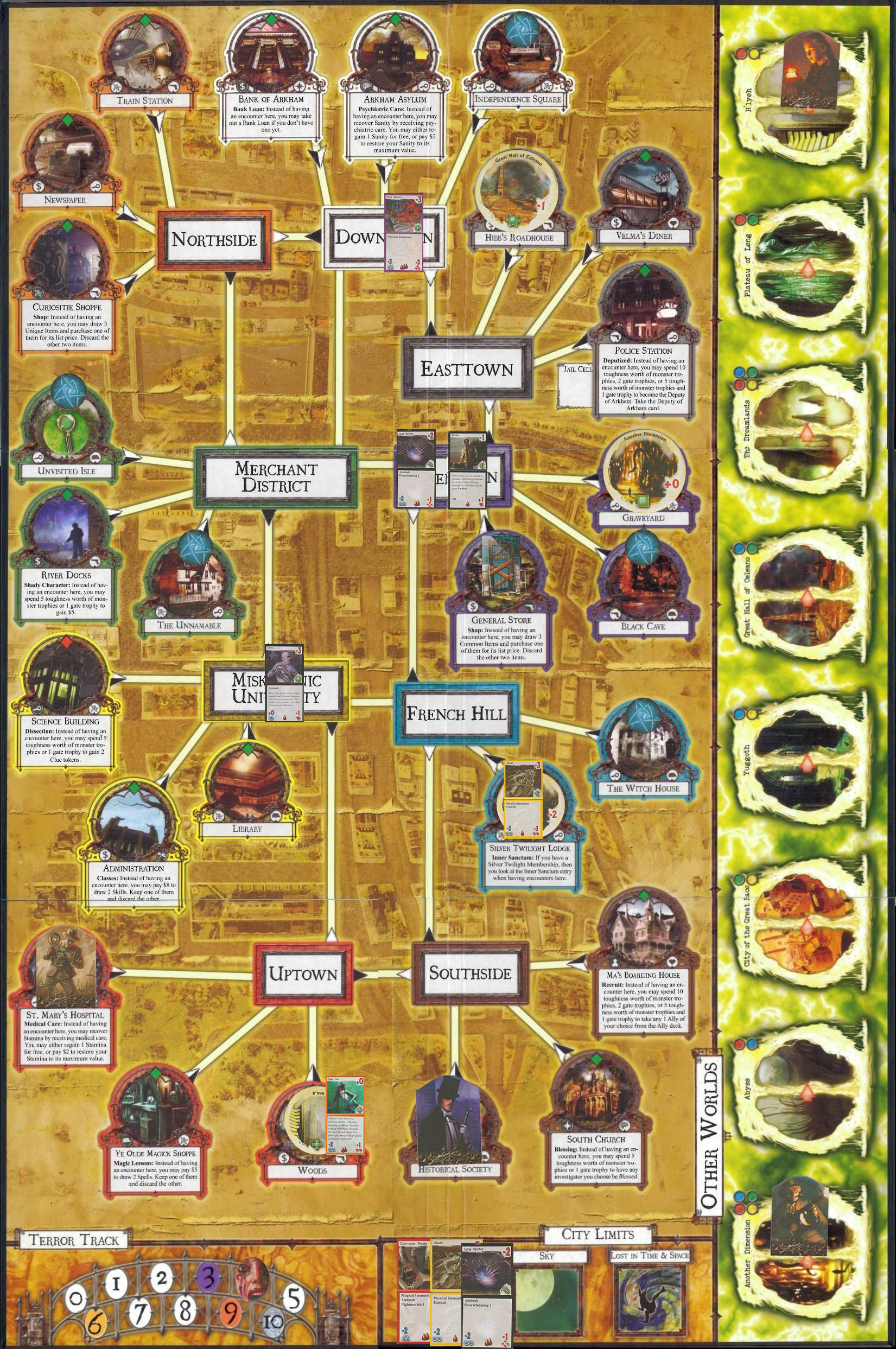 Upkeep:
First player token moves from Sister Mary to Darrell Simmons. Dexter Drake and Sister Mary retain their blessings, but Michael McGlen loses his. Sister Mary gains another dollar from the taxes of the good citizens of Arkham.

Movement:
Darrell Simmons high-tails it over to South Church.

Meanwhile, Dexter Drake decides to enlarge the circle of his friends and heads to Ma's Boarding House.

Michael McGlen returns to Arkham from Another Dimension.

Arkham Encounters:
Darrell Simmons offers up the trophies taken from the Mummy and the Moon Beast. Elsewhere, Michael McGlen feels his lost blessing return to him. 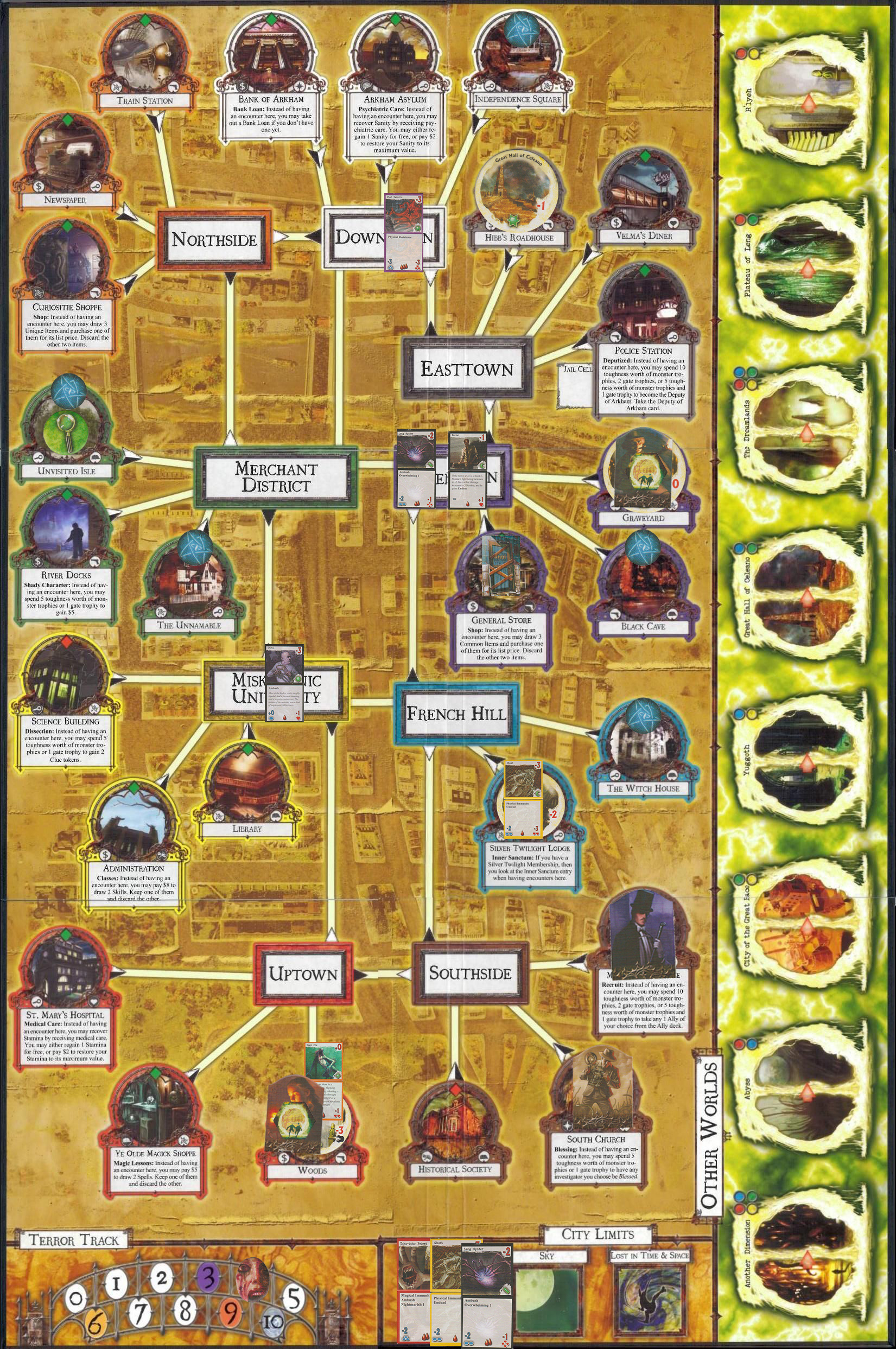 Arkham Encounters:
Dexter Drake slapsdown a couple of his gate trophies as proof of his badassitude and manages to convince Professor Morgan to join his efforts.

Michael McGlen grits his teeth and pours every ounce of his will to fight into closing the gate to Another Dimension. It shrinks until it finally seems to popout of existence. Using some of the acquired knowledge he's picked up, Michael McGlen manages to seal away the area.

With six otherwise unstable locations sealed away, the probing tendrils of the Ancient One seem to slack off. Perhaps you've beaten it. Perhaps it merely lost interest. Perhaps it will be back. But for now, your efforts have spared humanity and the world itself from an unspeakable hell of madness, pain and death.