Alright, back in Upkeep. Need Upkeep actions and slider changes from everyone. @Aladdar @MinusInnocence @Obsidian_Spoon @Board Rider

I'll keep her sliders where they are for now.

Finally, I'll attempt to Lure the Lhogar from the witch's house to me.

Now to make certain I survive that encounter, (Fingers crossed) raise my will to 4.

No slider change but Carolyn will tap the Brazier and restore a point of sanity to herself raising it to 5.

For the sake of speed she will move to the Science building.

We're still waiting for Obsidian_Spoon, but here are the top three Mythos cards revealed by Arcane Insight. That spell cast been a goddamn godsend. 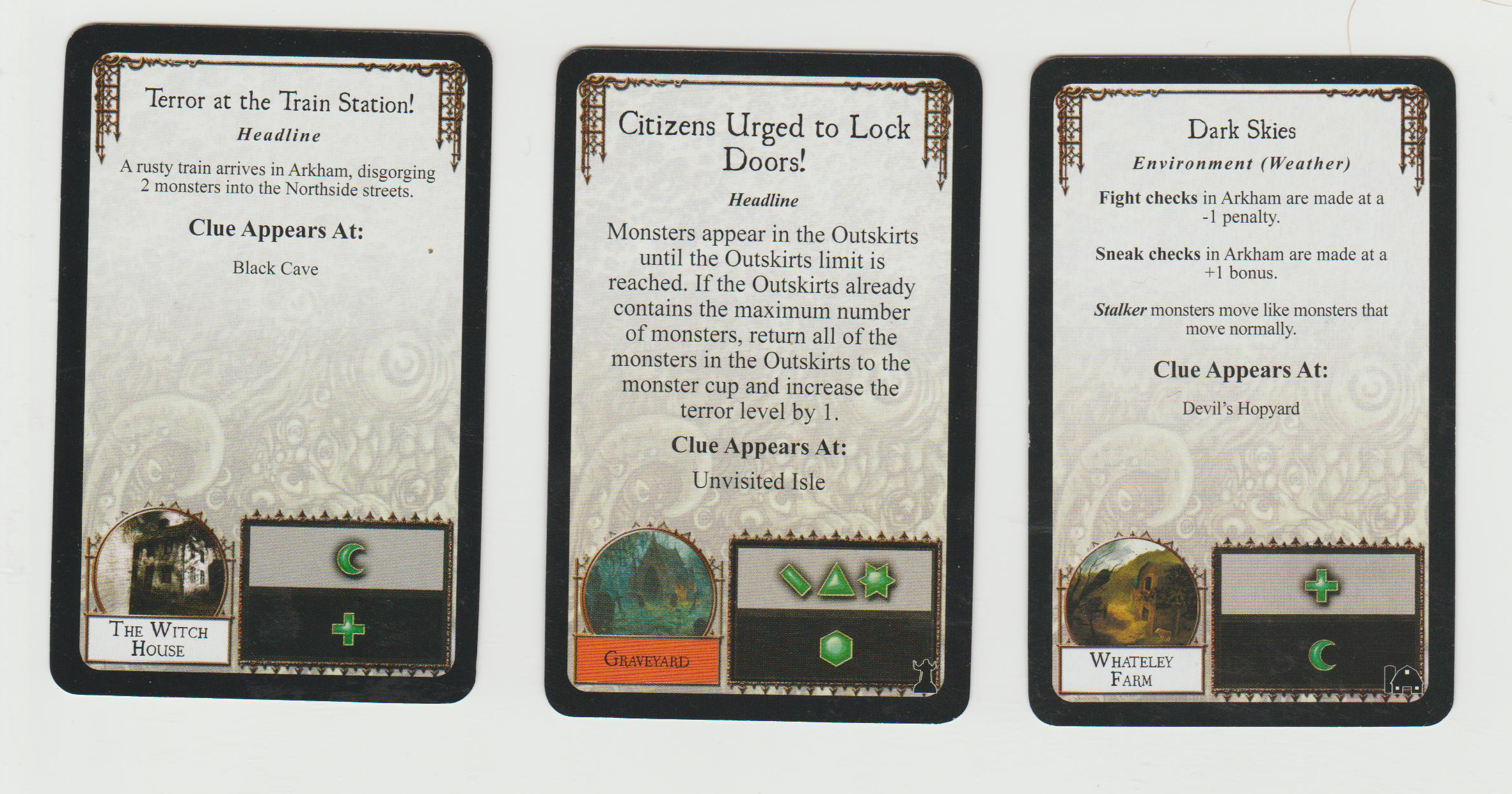 As before, if "Citizens Urged to Lock Doors" is drawn this turn, it will cause a monster surge, but if it's drawn after Lola is finished in the Other World, it will cause a gate burst, which is worse.

"Terror at the Train Station" is gonna cause a monster surge pretty much no matter what we do, unless Daisy is able to cast Arcane Insight and push that card back consistently every time.

"Dark Skies" will spawn a gate, which isn't great, but it'll be in Dunwich, where Jim is in a position to go deal with it and seal it afterward. However, since the moon symbol monsters move on black, it will also trigger Kate's Narcolepsy as well.

For my money, I'd say go with "Dark Skies" first. That will cause Kate to be stuck wherever she ends her movement at this turn, so she should plan for that. Barring spawned monsters being too badass, Jim can enter the new gate quickly and has the Clues to seal it. Then "Terror at the Train Station" next. Then "Citizens Urged to Lock Doors" after that. It'll take some precise timing, but I think that if Lola uses her Elder Sign as soon as she pops out of the gate during the Movement Phase, then Kate can use her Mi-go Brain Case during the same Movement Phase to swap places with Lola, which puts her in Graveyard after the gate closes (so she's not sucked in), but before the Mythos tries to open a gate burst there. The only wild card in that plan is if the monster surge from earlier spawns something that doesn't move away from Graveyard and is badass enough to put Kate in the hospital/asylum.

I'm not making any slider adjustments. If I'm going to be stuck somewhere for a turn, maybe the Police Station? I'm not sure where's best, but the possibility for clues or common items appeals to me.

ok, works for me.

I'm not making any slider adjustments. If I'm going to be stuck somewhere for a turn, maybe the Police Station? I'm not sure where's best, but the possibility for clues or common items appeals to me.

You can get almost anything from almost any location, technically. You're more likely to get encounters with Clues as a reward from unstable locations (locations with a red diamond instead of a green on the map). Police Station isn't about average for common items, though if that's your interest, then General Store might be where you want to be, since you can literally shop for common items in lieu of having an encounter.

It's not particularly my interest. I only have $5 after all. I need two more clues to reach 5, and I still have no decent weapons, so I was thinking encounters might help. I guess I can shop once at the General Store and then either shop again or have an encounter. That'll work. Lets go there.

The general store is your best place for standard weapons.

@Aladdar, action's on Daisy. How's she gonna deal with this giant tornadobeast she just called to her?

Ugh, I totally misread that card I think, so I may have to reconsider my approach here.

It is. It's immune to both physical weapons and magical weapons, but not spells.

ok, well this is likely going to be a really bad idea, but Fuck it. Let's try and kill this motherfucker.

Next let's try to cast shriveling.

Why could that not have been my combat roll. lol Now I'll get nothing but 1s.

ok, let's use the skill to hopefully get the one extra success we need.

@Aladdar, since Daisy is going to remain at Ye Olde Magick Shoppe through Arkham Encounters, will she be spell shopping or having an encounter?

Ye Olde Magick Shoppe - Miriam Beecher offers to cast a particuarly potent and dangerous spell for you... for a price. If you are willing, spend $5, then draw a monster at random from the monster cup. If it has a moon dimensional symbol, discard it and draw again. Otherwise, return that monster and all monsters that share its dimensional symbol to the cup.

@Obsidian_Spoon, here's what Kate sees for sale at General Store. She can purchase one of these and discard the other two or purchase none of them and discard all three. 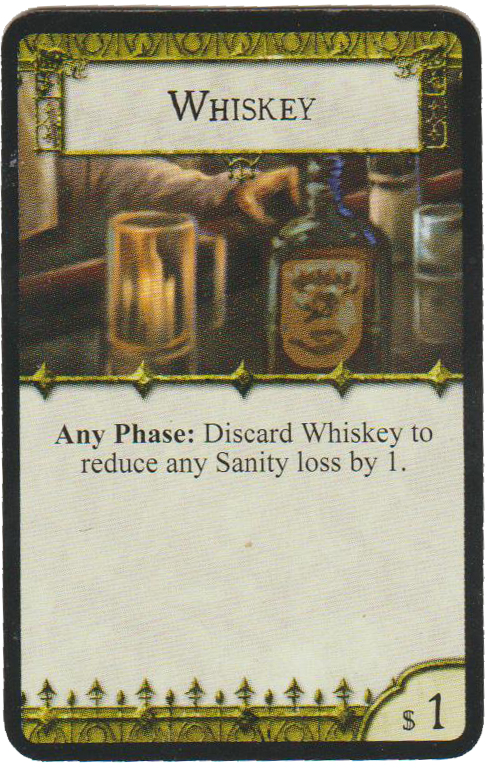 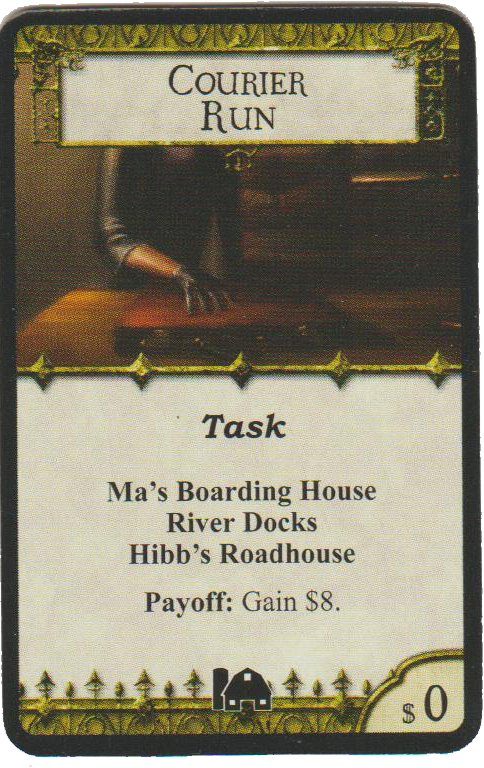 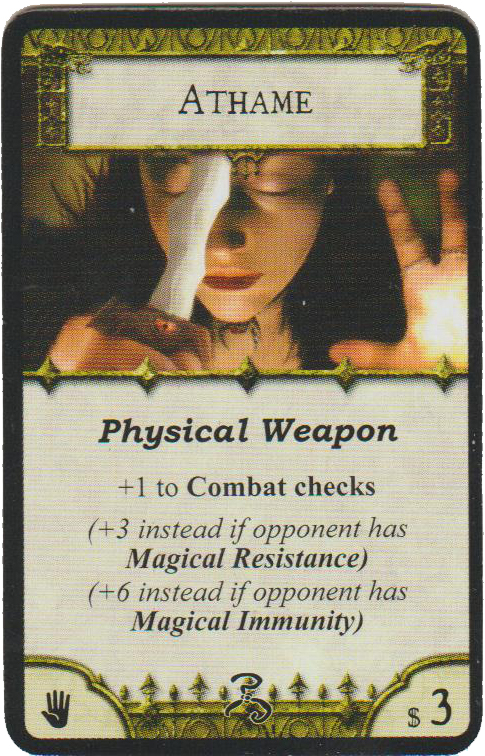 We haven't seen a Task before, so just a bit of explanation. Tasks are like Missions, except that they come from the Common Items deck and are generally much easier. For a Mission, you usually have to sacrifice something, but for a Task, you just have to spend an Arkham Encounters turn in the listed locations, in any order. So for Courier Run, you'd have to visit (in any order you choose) Ma's Boarding House, River Docks and Hibb's Roadhouse and you'd have to spend an Arkham Encounters Phase there. Having an encounter, doing a location's special text or even encountering a gate at that location all count. Upon successful completion of Courier Run, you discard it and gain $8. Task and Missions count as items, so they can be traded and they also count as items for things like having to discard an item to kill a Rat-Thing or losing half your items when being sent to the Asylum/Hospital.

Eh, I'll buy the athame. It's better than my knife, and I'll have two blades with the same artwork on them, and that is interesting to me.

@Board Rider, action's on Carolyn.

City of the Great Race - You awaken briefly and stare at your hands, which are the hands of another. Choose another Investigator and take all of his Clue tokjens. Lose 1 Sanity.

Daisy and Lola each have 0. Kate has 3. Jim has 9, but will be encountering a gate next turn. The choice is Carolyn's, but my advice would be to take Kate's Clues so Carolyn can afford to seal the gate when she's done with it.

Noted. Let's also get @MinusInnocence's action done so I only have to make one update instead of three.

Other - The tides of time and space collide. You meet your future self. Gain 1 Clue token, then pass a Will (+0) check or lose 1 Sanity.

Sounds fair to me.

Awesome, two trips through the same Gate and no Stamina damage.

Alright, we're back in Upkeep. I'll need Upkeep actions and slider changes from everyone. @Aladdar @MinusInnocence @Board Rider @Obsidian_Spoon

Jim is gonna spend this turn tearing that Cultist a new butthole before it fucks off into a vortex and wakes up The Dunwich Horror. On the next turn, he'll go to Whatley Farm and try to take out the Proto-shoggoth, then he'll enter the gate to Lost Carcosa.

It's also worth noting that we're well over halfway full on Nyogtha's Doom Counter. When he gains the 12th token, he wakes up.

My sliders are fine where they are since using the Elder Sign obviates the need to make any roll to close the Gate whatsoever.

Lore or Fight, your choice.

No sliders. Is this the turn where I need to switch with someone to stop a gate opening?

Lore or Fight, your choice.

Can the Fight roll be augmented by items or is it just a flat roll?

No sliders. Is this the turn where I need to switch with someone to stop a gate opening?

It isn't. Technically, you wouldn't be able to do that right now anyway because Kate is delayed thanks to her Narcolepsy, so she's losing out on her turn in the Movement Phase.

Can the Fight roll be augmented by items or is it just a flat roll?

Cool, so we get to control the future again.

As for my slider changes, I need to figure out what I'll be doing next round.

@Fixxxer, I should be able to take care easily of either the cultist or the Proto-Shoggoth. Would it be helpful for me to lure one of those over to me so you have an easier route to the gate? If you think you can take the Proto-Shoggoth easily enough, then it likely makes sense for me to lure the cultist so you don't have to waste a turn fighting it. If you're concerned the Shoggoth is going to give you problems, I can clear the gate by taking that one.

I think Jim can take the Proto-Shoggoth. If Daisy wants to lure away the Cultist, that'll certainly help. 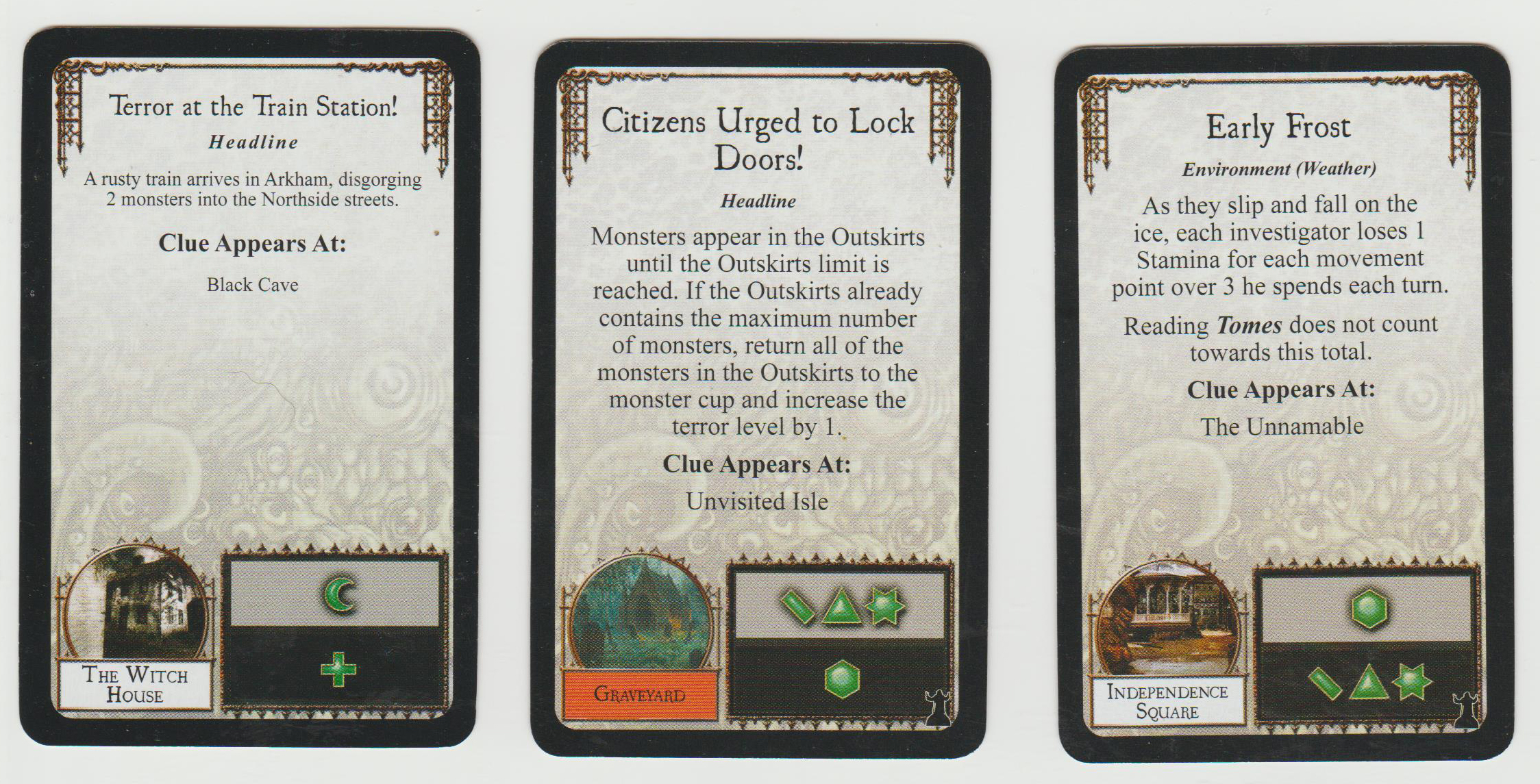 I'm trying to make sense of the actions taking place. If I'm reading things correctly, we'll be closing and sealing the Graveyard on this turn? If so, that probably needs to stay where it is to open next turn, and just make certain that Kate moves over their for the next turn to make certain it doesn't open right? Which means that we need to decide if it's better to have the results of the Witch House card run now or Independence Square.

What's our current environment? I can't recall? Thoughts on these?

as for the rest of my upkeep.

I'll cast Lure Monster to bring the cultist to me. And I'll keep my sliders as they are. I'll also just have an encounter in the spell shop at the end of my turn.

Our current environment is as follows:

Fight checks in Arkham are made at a -1 penalty.

Sneak checks in Arkham are made at a +1 bonus.

Kate is unable to act this Movement Phase because she's delayed by her Narcolepsy and the Mi-Go Brain Case she'd use to swap spots with Lola is used during the Movement Phase, so it'd be a good idea to push "Citizens Urged to Lock Doors" back to next turn or the turn after. Lola will act before Kate, so Kate can really just walk over to Graveyard instead of needing to use the Mi-Go Brain Case.

"Early Frost" will give us a new environment and spawn a gate.

"Terror at the Train Station" will give us a monster surge.

If we do it right, it's possible that Kate could prevent two gates from opening. If we accept the monster surge this time around, then Kate can use her turn in the Movement Phase next turn to get to Graveyard and keep that gate burst from happening. Then on the following turn, she could jet up to Independence Square and prevent that gate from opening (or someone can head to Independence Square next turn and she can Mi-Go Brain Case swap places with them, either/or).

If that's ok with Kate, then so be it.

Great. I just don't want this to become a game of us telling you what to do with your character. It can become a bit boring for you in that regard if we do. You're already handicapped with that narcolepsy issue, I want to make certain you're still enjoying your time playing.

It's worth mentioning that while it's only one or two cards out of the deck, it's possible to have an encounter at Arkham Asylum or St. Mary's Hospital that can cure a Madness/Injury, if you get one that's becoming a real pain.