Before deciding where I want to move my sliders, as per Lola's Improv ability I would like to take a look at the bottom card of the Skill deck, please.

Also, will Carolyn have to deal with those monsters before Lola moves? My preference would be for them to not be standing in her path to the Gate, but I think I have a plan in case they are.

Can Carolyn de-exhaust the Brazier and heal the point of sanity damage? She will do that with no change to sliders. Carolyn is going to fight the two creatures in her space in route to the gate. I will need to complete that action a bit later.

Cat fight! Looks like both ladies are looking to go gate hopping!

@Fixxxer you're right, I should probably be casting Voice of Ra each turn. There's no real drawback as I see.

So we'll cast that first.

Ok, that succeeded. Now we'll cast Arcane Insight with 2d6 thanks to that success.

keep sliders where they are.

actually ignore that. Move speed down 2 spots in case I have need of sneak soon.

@Board Rider, yes, Carolyn can de-exhaust Brazier of Souls and heal her Sanity. She's gonna need that shit. That Star Spawn has big dick energy.

@MinusInnocence, this is currently the bottom card of the skill deck.

@Aladdar, here's the top 3 cards of the Mythos deck. 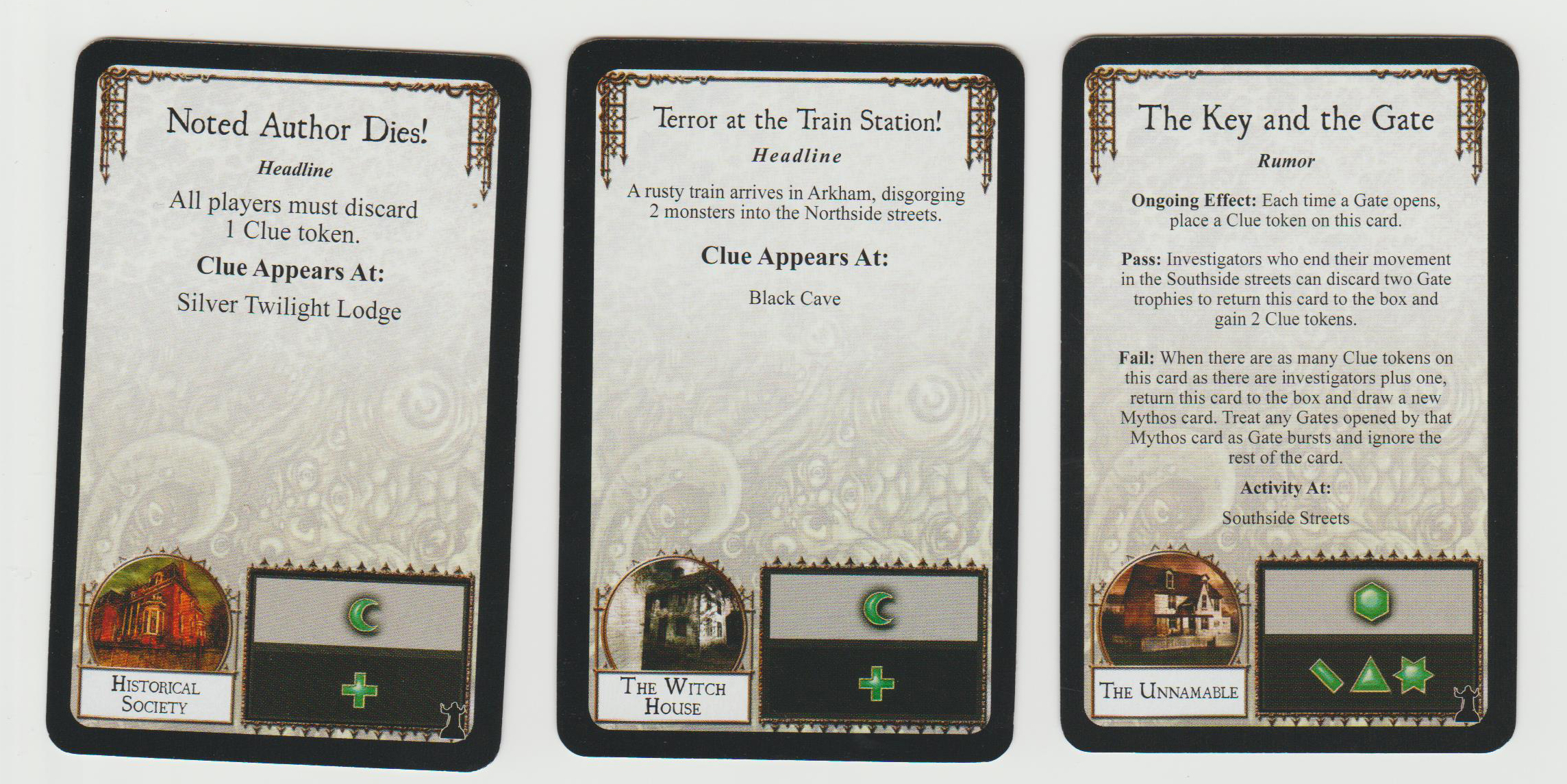 OK. We'll go ahead and swap Library Use for Stealth. Assuming Carolyn will have to either Evade the monsters or enter combat against them before Lola's turn comes up, I want to move my slider to Lore 3/Luck 2.

On Lola's turn, assuming the monsters are gone we'll move to that Gate with that -3 penalty. If one of the monsters is still there, we'll move anyway and try Evading. I'm just not willing to risk it if both of them are still in my way and in that case Lola will instead remain where she is.

No slider change for Kate.

I wonder if I shouldn't make all of the monster cards available in a folder for situations exactly like this. Does the following link lead you to an imgur album full of monster cards?

We're in the Upkeep Phase, so we still have Movement, Arkham Encounters and Other World Encounters before whichever card at the top of the Mythos deck is drawn.

On the subject of Kate's special ability, it's worth pointing out that she prevents gates from opening and random monsters from appearing. This includes encounter cards that say something to the effect of "a gate and a monster appear!" She does so just by being there, which means that if an Investigator that is not Kate draws such a card while Kate shares that same space, the gate and/or monster is prevented from appearing, which is especially sweet since the random monster will always be the Tendril of Nyogtha. Suck it, Ancient One!

Kate preventing a gate and monsters from appearing via a Mythos card does not prevent anything else during the Mythos Phase, though, so monsters will still move as indicated, Clues will still appear as indicated, etc. But if a Mythos card tries to open a gate where Kate happens to be, then we get no gate, no monsters spawning through said gate, and no Doom Token added to Nyogtha's track. Plus, if she happens to be where a gate already is (she's explored the gate and returned, but hasn't closed it yet) and a gate tries to open in that location, then nothing happens, no monster surge. Kate shuts that shit down. Finally, if the special text of a Mythos card calls for monsters to appear in a street or location where Kate is, she puts the kibosh on that. An example of this is the Terro at the Train Station! card that's included in the 3 Mythos cards that Aladdar is reordering right now. It calls for 2 monsters to be released at Northside streets. If Kate happened to be located at Northside streets during the Mythos when that card is drawn, the 2 monsters never show up.

Yes, I can see all the monsters there. Can you maybe post that in the Character Sheets post so it's always easily found?

As for the cards. What do you think of setting the order as:

Any cons to that plan or pros to another arrangement I didn't consider?

Ok, unless anyone else objects, we can go with that arrangement.

Alright, we're in Movement. Jim's had his action. Action's on Lola, @MinusInnocence. Kate's delayed through the Movement Phase, so I'll need Movement Phase actions from @Board Rider and @Aladdar as well.

Yeah, that's correct. I wasn't looking at the map when I called for an action for Daisy. My bad.

OK, scratch my earlier remarks. Lola will roll the dice on sneaking past these fuckheads. We'll start with the Deep One. Lola has 2 dice.

Great. Now, she has only one die to play with against the other baddie; but she gets to reroll using her new Stealth skill. Let's see how it goes.

Awesome. Lola proceeds to the Gate with her last Movement point. Sucks to suck, Carolyn! Eat my dust.

Horror vs. Deep one.

Combat vs. Deep One. Use Sword of Glory.

I think Carolyn actually had 6 sanity and not 5. Should be at one...not 0.

If that is correct Carolyn will use the brazier.

Hopefully, that all looks good. Without Fixxxer's helpful, dare I say gently, hand I was going off of my last encounter.

I figure there's a good chance I neglected to apply Carolyn's healing from Upkeep, so we'll go with that. That puts Carolyn as the victor, but barely hanging onto a thin thread of sanity.

We're in Arkham Encounters. @MinusInnocence, will Lola be traveling to Yuggoth or Another Dimension through this split gate? I left Lola in Graveyard pursuant to an answer to this, and for the sake of saving time went ahead and drew an encounter for Kate. Through the luck of the draw, she got the same encounter as last round. Kate's skillful as fuck, yo. @Aladdar, Investigators get a pass from having to engage monsters on the turn they return through a gate, so you don't have to worry about fighting or evading until next Movement Phase. If you want to go ahead and roll vs the gate (it's -1, if you can't read it), we can move right to Lola's action in the Other World.

We'll do Another Dimension. I don't think there are any Gates currently open to either place elsewhere on the board and if memory serves, Yuggoth is Blue/Yellow and Another Dimension is Green/Red. Mama likes green cards.

Ok, that does it, spend the clues to seal it as well.

Other - The floor is crumbling beneath you! Make a Speed (-1) check or be lost in time and space.

Well, that doesn't sound like a green card at all. Gonna have to burn this dimension bad on Yelp when I get out of here.

We're back in Upkeep. I need Upkeep actions and slider changes from @Board Rider, @Obsidian_Spoon and @Aladdar.

Kate shut down the gate opening, which means that the entire damage of the Mythos was that a Maniac moved, a Clue appeared at Silver Twilight Lodge and as per the headline, each Investigator that had Clues had to discard one of them, which has already been recorded on our Investigator sheets. Good work, Kate!

No slider movement but Carolyn will restore a point of sanity and tap the Brazier.

Where's the next gate going to open, and can someone get there before Kate's movement so I can swap places with them?

Unless Daisy successfully casts Arcane Insight this Upkeep and finds something she'd rather have on the tp of the Mythos deck (which is possible), then the Mythos card we're scheduled for next will open a gate at The Unnamable.

Ok, no luck there.

Move my fight slider all the way up.

Still waiting on slider changes from @Obsidian_Spoon and (technically) @MinusInnocence.

I'm fine hurtling through the void with my stats where they are for now.

Looking for Movement Phase actions for Kate and Carolyn. @Obsidian_Spoon @Board Rider

Daisy will need to either fight or evade the Child of the Goat when her action comes around, @Aladdar. For his own part, Jim Culver is going to head across Dunwich to start collecting Clues there.