You know what to do.

I think so, but where are we going to find a duck and a hose at this hour?

You youngin's, with your "duck and a hose." Bah! Back in my day, we didn't need some silly duck and hose. No'sir. All we needed was a fork, a Coke bottle and some exposed electrical wire.

How can we assume that Gruum got the message to come back at that time?

I guess the question is how much does Gruum trust that Cragar correctly interpreted Voitto's coded instructions about what to do with the dick-in-a-box.

Gravington would have done his best to ensure everyone got the message, ducking into the bar (since he hadn't done so originally) to give folks the head's up discretely.

If Gravel dick told him, he's there.

Also, is pig fuckers one of those hyphenated combos, a compound word, or just two separate words?

I think most people will understand you regardless of which spelling you use. It probably doesn't have a standard orthography, anyway.

If we use Mad Max: Beyond Thunderdome as the paragon example it ought to be, we can see that while the "Pig Killer" brand on one of the primary characters has kerning that isn't so great, it's obviously meant to be two distinct words.

Since motherfucker has become a single word through repeated use, pigfucker must as well.

Wait, wait, wait... are you calling my mother a pig?

From some research on the web:

"https://www.grammarbook.com/punctuation/hyphens.asp" wrote:
Generally, hyphenate two or more words when they come before a noun they modify and act as a single idea.

"https://afterdeadline.blogs.nytimes.com/2015/05/12/hyphens-run-amok/" wrote:
In general, assume you can go without a hyphen unless a modifying phrase or expression would truly be confusing or hard to read without it.

"https://www.grammarly.com/blog/hyphen/" wrote:
Use a hyphen in a compound modifier when the modifier comes before the word it’s modifying.

"https://en.oxforddictionaries.com/punctuation/hyphen" wrote:
Hyphens are used in many compound words to show that the component words have a combined meaning (e.g. a pick-me-up, mother-in-law, good-hearted) or that there is a relationship between the words that make up the compound: for example, rock-forming minerals are minerals that form rocks.

Of these, I'm inclined to agree with the NYT - even though I strongly disagree with their stance on the Oxford comma.

The use of a hyphen is primarily of stylistic rather than grammatical significance, much like the Oxford comma. There are instances where I expect to see hyphens more often. But mostly, this is like the Oxford comma in the sense that you should ask the editor of the publication for which you are writing, and the editor tells you what the rule is going to be.

With the necessary caveat that editors who don't ask for the Oxford comma are wrong.

The Oxford comma is a crutch for those who aren't paying sufficient attention to the syntax of their writing. If my editor tells me to use it, then I use it. But it doesn't resolve any ambiguity in the utterance which includes it, because commas basically do not exist in speech. The belief that they prevent confusion between items in a list is predicated on the mistaken idea that written language has some kind of supremacy over spoken language. But the opposite is true; it is spoken language that precedes and shapes written language.

I can tell you that, among lawyers, the Oxford comma is wildly popular for its ability to add clarity. I imagine it is going to be popular among drivers in Maine fairly soon as well.

I don't think your final assertion is accurate or well supported. Written language and spoken language both reshape each other rather than one exclusively preceding the other. The meme of the "thot" or the verbalization of "LoL" both come from the dynamic interplay of the written word and the spoken one.

I have never heard anyone verbalize either of those. But fair enough, it is a process that can go both ways. However, most of the time it runs in favor of having the things people actually say become the standard usage in writing. There is some cause to believe that a change deriving from a particular working-class pronunciation habit—"f" for the unvoiced "th" sound—will supplant the current standard in British Received English, for example. At present, there are more native speakers of British English who use this pronunciation than there are speakers who do not, and the usage is creeping into written language because people write what they hear.

Regarding the case in Maine (which I was aware of, but had forgotten about), the lack of clarity was not derived from the presence or absence of an Oxford comma. The culprit was some ambiguity over whether the prepositional phrase "for shipment" should be construed as "for shipment or distribution." The court held that an Oxford comma would have made it clear, which is true. But the Oxford comma is not the only remedy, and it is not even the best one.

The ambiguity derives from the use of a prepositional phrase to end the penultimate item in a list. So one solution would be to skip the prepositional phrase, so that the list ends "packing or distribution." This would be problematic if there is some compelling reason why packing for shipping needs to be exempt from overtime but packing for other reasons does not. But probably there isn't such a concern, and the legislators just included unnecessary information in their phrasing.

Still another option would be to invert the order of presentation for the final two list items, as "distribution or packing for shipping" would eliminate the ambiguity that the court detected. This may be the best solution, since it preserves the exact phrasing. If "packing for shipping" is the only kind of packing that is meant to be exempted, then that'd be significant.

So. Oxford commas are a way of clarifying sloppy syntax, and the major use cases for them derive from 1) the careless application of prepositional phrases and 2) the possibility that the penultimate and ultimate items in a list may be construed as an appositive. But it is better to use tidy syntax, because of the dual nature of language as both writing and speech. If your utterance requires Oxford commas to render it unambiguous when it is written, then there is an underlying issue with your syntax that will persist when it is read aloud.

If I write to someone instructing him, "Please bring fishing line, fishhooks, corks, weights and worms on your next visit," (I live on the shore of a small lake), there is no syntactical ambiguity. The Oxford comma is useless here.

I'll disagree with you for the time being, but I think this gives us a very good idea for what plans we should take ICly. A bunch of surly grammarians hanging out by the back door of a warehouse in the docks will strongly dissuade others from investigating our presence without causing too much of a ruckus.

Either construction would do. They have equivalent meanings because that list is syntactically unambiguous.

That's exactly the type of argument that will drive stevedores, packers and shippers away from the conversation.

Yes. But you have to watch out for the cigar rollers. I fancy that they would have a deep appreciation for the subtleties at hand, because they paid for people to read aloud to them on the factory floor, particularly from newspapers. Which, of course, do not use the Oxford comma.

It is settled then. If we see cigar rollers in the docks we will immediately return to the Goblin in order to get Viotto's finest dick jokes. Alternately, we'll take whatever second-rate swill we can get from Graveldick.

I dunno about you guys, but I'm having a ton of fun.

You used an Oxford comma in your last IC post, so I'm super happy.

Haha, it's completely stylistic because it's part of the construction of a simple list! So it doesn't matter!

I will admit that it's hard to use an oxford comma when typing with one hand.

I don't have a problem with the Oxford comma, but it's not how I was taught. I have a distinct memory of my teacher pointing out that the use of "Or" or "and" or the like was meant in a way to both stand in for what we call the Oxford comma and to signal that this was the last item in the list. I smile at all of the Oxford comma memes I see because they're funny, but I also agree with Talanall that they're predicated upon a sloppy reading of the subject material.

I know I'm last. Tag me when I'm supposed to talk. I don't want to skip anyone.

Gravington will be right after Cragar. I'm very interested to see how he responds to this one. Public speaking, and all.

My god, this is succeeding beyond Voitto's wildest dreams.

I'm trying let you guys play out your interaction here without crowding you thru Voitto. He's . . . kind of a big personality.

We're still coalescing as a group, so I think Voitto's cajoling is a good thing.

Starting tomorrow afternoon and extending through until the afternoon of Wednesday of next week, I expect to be unavailable due to a travel obligation. I will appreciate your patience with the delay.

I've returned. Please accept my apologies for the delay.

Has your merry band of blackguards finished scheming? Or, for that matter, have you not finished but been seized by a desire to scheme someplace where Voitto is not? Do you want to go and do reconnaissance, or something?

Or should I just throw you, Frisbee-like, into the tumult of another encounter?

Anyone else weighing in on this decision?

I think we have consensus.

Sorry for my delay in responding. I am back and should now be active.

I imagine there may be some brief discussion on the way to the docks, unless there is objection. Is there any objection to me responding to the IC thread with Cragar walking in that direction?

It's quite alright. I've been sluggish myself. Travel, and now recovering from a bug I picked up on the plane home.

I personally have no objection.

Here's a map for reference purposes. The warehouse your characters are interested in is the building in black. Other buildings are in contrasting colors, mostly for the sake of making it clear where one structure leaves off and the next begins. North is up.

The waterfront is generally northeastward from the mapped area. The Giggling Goblin is roughly westward. 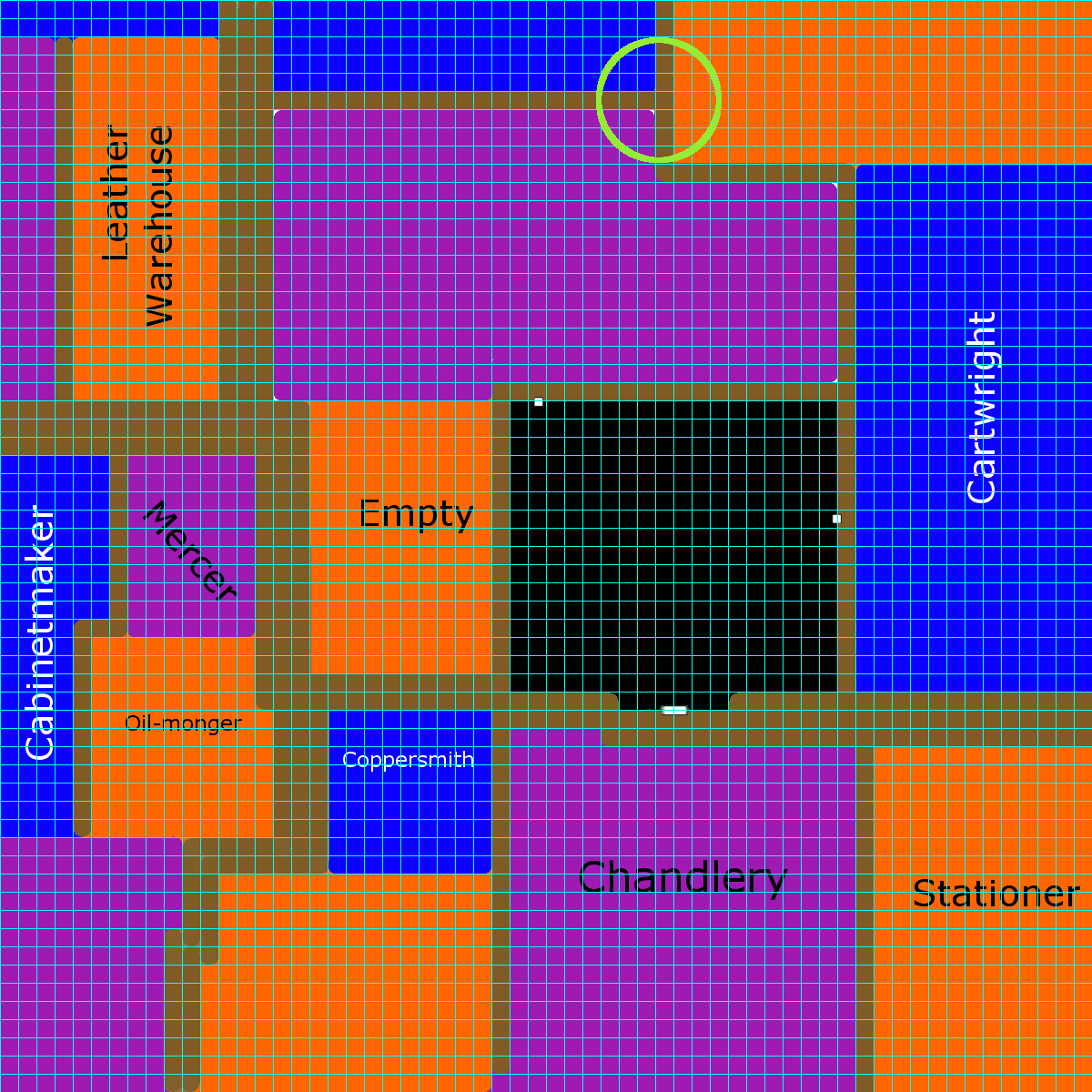 The map has updated.

Where is the door to the Empty Warehouse?

There is one in the middle of the southern façade of that building, although it is heavily chained up.

Sorry, was out of town and didn't know until I arrived that I didn't have internet. I'm back.